However, after reaching the playoffs for the first time since 2009, they lost a shootout to Independence, 35-25.

One year later, Lambert and the Hawks made school history again. This time they took advantage of six turnovers to win their first playoff game in school history. The Hawks defeated the Memphis Central Warriors 24-7 Friday night. 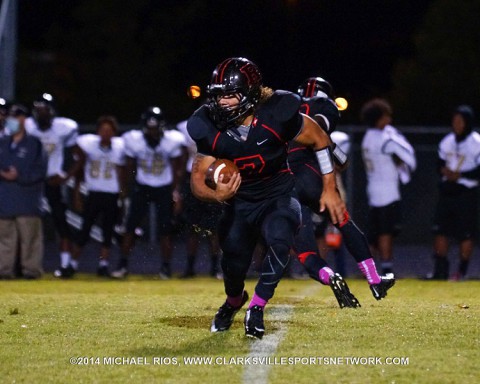 But three fumbles and three interceptions by the Warriors offense kept that speedy defense on the field too long. Inevitably, the tired defenders could not continue to stop Johnson who rushed for two second half touchdowns.

After being held to one yard rushing in the first half, Johnson finished the game with 63 yards rushing and two touchdowns. The Hawks one other touchdown was a 3-yard run by senior running back Tristan Luke.

Luke’s touchdown was the first score of the game. It came at the end of a 5 play, 31-yard drive by the Hawks after the Warriors first turnover.

The Warriors first turnover came on their opening drive. They began the game with five straight run plays. On the sixth play senior running back Artavious Russell fumbled the ball and the Hawks recovered in Warriors territory.

Turning the ball over and giving the ball to the Hawks in good field position became a repeated theme for the Warriors.

The Warriors only score came at 9:34 in the second quarter when sophomore running back Theotis Evans ran nine yards into the end zone. The Warriors ended their next offensive drive with another fumble, but the Hawks failed to take advantage that time with a score.

The Hawks kicked a 32-yard field goal at the end of the first half to make the score 10-7.Then they opened the second half with a 9-play, 45-yard drive that ended with Johnson’s first touchdown.

The Warriors next four offensive drives ended with a fumble and three interceptions. Senior Deddrick Thomas completed 4 of 10 pass attempts for 92 yards. He also rushed for 25 yards. His longest pass was a 44-yard bomb caught by Jamerson Washington with less than a minute left in the game that set up a first and goal from the 5-yard line. However, time ran out before the Warriors could score.

Washington’s second touchdown came after Thomas’ first interception. With 8:03 remaining in the game, Washington started right, then spun and reversed field, and sprinted 15-yards to the pylon for the Hawks last score.

The Hawks improve to 8-3 and advance to play in the second round of the Class 6A Playoff Bracket on the road at undefeated Whitehaven (11-0).