Tennessee Titans kick off seasons second half at Baltimore Ravens

The Titans and Ravens have shared an intense rivalry since their first encounter in 1996. In 20 all-time meetings, including three playoff bouts, each club has won 10 times. However, the Titans have won four out of the last six match ups. 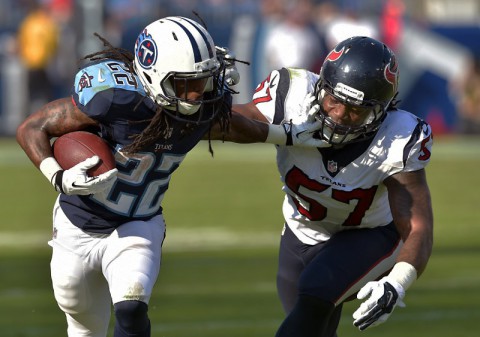 This week’s game will be televised regionally on CBS, including Nashville affiliate WTVF NewsChannel 5. Andrew Catalon will handle play-by-play duties, while Steve Beuerlein and Steve Tasker will serve as analysts.

The Titans Radio Network, including Nashville flagship 104.5 The Zone, will broadcast the game across the Mid-South with the “Voice of the Titans” Mike Keith, analyst Frank Wycheck, game day host Rhett Bryan and sideline reporter Jonathan Hutton.

The Titans look to begin the second half of their season on a winning note after suffering two consecutive losses prior to last week’s bye.

Their second win of the season came on October 12th against the Jacksonville Jaguars, but it was followed by a 19-17 road loss to the Washington Redskins (October 19th) and most recently a 30-16 defeat at LP Field, courtesy of the Houston Texans (October 26th). 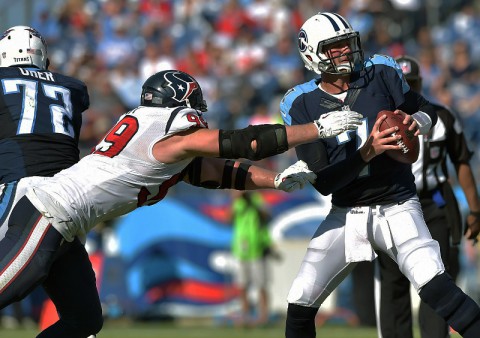 He previously attempted only five passes through the first seven weeks, as Jake Locker (four starts) and Charlie Whitehurst (three starts) split the first-team duties as a result of Locker’s injuries.

But during the practice week leading into the Houston game, Titans head coach Ken Whisenhunt announced the decision to go with the sixth-round pick from Louisiana State University.

Mettenberger was 27-of-41 passing for 299 yards with two touchdowns, an interception and a passer rating of 93.4. He completed his first career touchdown pass to tight end Delanie Walker in the third quarter and added a second to wide receiver Justin Hunter in the fourth quarter.

On defense, the Titans got five sacks from five different players against the Texans to bring their season sack total to 23. Only seven teams have more sacks in 2014 than the Titans, and since 1999, only three Titans defenses have produced more than this year’s unit through a season’s first eight games.

Fourteen different Titans have at least one sack, led by defensive tackle Jurrell Casey, who has four.

The Ravens are in their seventh season under head coach John Harbaugh. They went to the playoffs in each of their first five seasons with Harbaugh at the helm and won the Super Bowl following the 2012 campaign.

In 2014, Harbaugh’s squad is in the midst of a heated battle for supremacy in the AFC North. The Cincinnati Bengals currently sit atop the division at 5-2-1, with the Pittsburgh Steelers (6-3), Cleveland Browns (5-3) and Ravens trying to keep pace.

Like the Titans, the Ravens enter this week’s game on a two-game skid, including a 27-24 loss at Cincinnati on October 26th and a 43-23 defeat last week at Pittsburgh. However, they began the year by winning five of their first seven contests and currently own a three-game home winning streak.

Titans-Ravens Series at a Glance

QB Zach Mettenberger, LT Taylor Lewan and RB Bishop Sankey can become the first quarterback/left tackle/running back trio to start as rookies in the same game for the franchise since the 1970 NFL-AFL merger.

The Titans and the Ravens have developed a fierce rivalry over the course of 20 all-time meetings since the series originated in 1996, including three playoff battles.

The highly competitive series is knotted at 10-10. Of the 20 games the teams have played against each other, 11 have been decided by four points or less, with the Titans holding a 6-5 advantage in those meetings.

The two teams played together in the AFC Central Division for six seasons after the Ravens relocated to Baltimore from Cleveland in 1996. Realignment in the league in 2002 took the Titans to the AFC South and the Ravens to the AFC North, ending their twice-yearly meetings. In the seven games since realignment, the Titans have a 4-3 lead.

Most recently, the Titans hosted the Ravens in Week 2 of the 2011 campaign (September 18th) and prevailed 26-13. Matt Hasselbeck passed for 358 yards, and Kenny Britt totaled 135 receiving yards in the win.

The last time the Titans and Ravens met at M&T Bank Stadium was during the 2008 regular season. In that game, the Titans, led by quarterback Kerry Collins, took their first lead of the game on an 11-yard touchdown pass to tight end Alge Crumpler with less than two minutes remaining in the fourth quarter. They held on for a 13-10 victory.

Despite owning the NFL’s best record at 13-3, the Titans lost to the Ravens at LP Field in the regular season—the Titans’ first-ever loss at their new stadium—and then again in a Divisional Playoff game the same year. The playoff win launched the Ravens to their eventual Super Bowl XXXV Championship.

Five years later at LP Field, the two clubs met again in the playoffs, this time in the 2008 Divisional Round. Matt Stover’s 43-yard field goal with less than a minute on the clock provided the Ravens a 13-10 victory.

The Titans used 358 passing yards from Matt Hasselbeck and three turnovers by their defense to defeat the Ravens 26-13 at LP Field.

Hasselbeck completed 30 of 42 passes for 358 yards, one touchdown and one interception (95.1 passer rating) in the victory. His primary target was wide receiver Kenny Britt, who set a career high and led the team with nine receptions for 135 yards and a score.

The Titans concluded six of their final seven possessions with scores, including four field goals by Rob Bironas. At the same time, the defense limited quarterback Joe Flacco and the Ravens offense to only one field goal in the second half.

After a scoreless first quarter that included interceptions by Ravens defensive end Terrell Suggs and Titans cornerback Alterraun Verner, the Titans put together their first long drive, moving from their own 19-yard line to the Baltimore 17. But Bironas missed a 34-yard field goal to keep the game scoreless.

The Titans forced another turnover on the ensuing possession. Rookie defensive tackle Karl Klug knocked the ball out of the hands of running back Ricky Williams, and safety Jordan Babineaux recovered the fumble at the Ravens’ 34-yard line for the Titans. Nine plays later, a 25-yard field goal by Bironas put the Titans on the scoreboard.

The Ravens answered with a seven-play, 81-yard drive. Running back Ray Rice helped give them a 7-3 lead with a 31-yard touchdown reception on a screen pass from Flacco.

The Titans then marched 80 yards on nine plays. Hasselbeck hit tight end Jared Cook for a 33-yard gain and later found Britt for a four-yard touchdown.

With 29 seconds remaining in the half, the Titans kicked off to Baltimore’s David Reed, who fielded the kickoff in the end zone and raced 77 yards on the return. That set up a 41-yard field goal by Billy Cundiff as time expired in the half.

The Titans received the opening kickoff of the second half and put up points for the third consecutive drive. On third-and-eight, Hasselbeck completed a 42-yard pass to Nate Washington. Then, on fourth-and-inches, running back Javon Ringer took a pitch from Hasselbeck on a misdirection play and raced 10 yards to the end zone.

There were a total of three field goals in the fourth quarter. An interception and 30-yard return by Titans cornerback Jason McCourty led to Bironas’ third field goal of the game, this time from 39 yards. The Ravens came back with a 72-yard drive and 29-yard field goal by Cundiff.

The Titans got the ball back with 6:58 on the clock, and Hasselbeck directed a 14-play, 66-yard drive that consumed all but 26 seconds of the remaining time. It included a pair of third-down conversions and a 13-yard pass to fullback Quinn Johnson on fourth-and-one. Bironas booted his fourth and final field goal (33 yards) to provide the final score of the contest.