The annual Soiree on Franklin, in its fifth year and sponsored by the Acuff Circle of Excellence board of directors, featured representations of all of APSU’s arts disciplines: music, dance and theatre, creative writing and the visual arts. This year’s theme, “Coming Home to the Arts,” was chosen to tie into the University’s Homecoming Week. 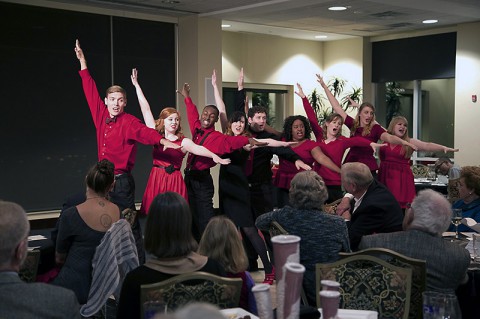 Austin Peay students from the cast of the upcoming “Broadway on the Cumberland.” entertain at the 2014 Soiree on Franklin.

Proceeds from the Soiree benefit the endowed Acuff Circle Scholarship in the Arts, awarded each year to an Austin Peay student pursuing a fine arts degree. The scholarship was awarded this year to Michael Mason, a theatre and studio art student from Springfield, TN.

The Circle, a non-profit organization affiliated with the Austin Peay Foundation, serves as a patron society of APSU’s Center of Excellence for the Creative Arts. It advances the importance of the arts and culture at the University and in the community.

In addition, it promotes the arts with other non-profit groups by hosting collaborative events.

Students, faculty and graduates were spotlighted during the evening, with the opening presentation being a poem written for this year’s celebration, “Early Mornings Near a River,” by Jeff Hardin, a 1990 APSU graduate. Hardin, professor of English at Columbia State Community College, has twice received the Academy of American Poets Award, has been nominated five times for the Pushcart Prize, and nearly 500 of his poems have appeared in major journals.

His poem was read by retired APSU English professor David Till, who commented that because of Hardin’s national notoriety, he wouldn’t be surprised if Hardin were named the nation’s Poet Laureate some day.

Music for the evening included selections by David Steinquest, professor of music, Darrin Hoffman, 1987 and 1990 graduate, and Bo Clayton, a 2014 graduate.

Representing the Department of Theatre and Dance were Christopher Bailey, assistant professor of musical theater, and students from the cast of the upcoming “Broadway on the Cumberland.” The cast members were Nathan Brown, Sam Mynhier, Patrick Pride, Maggie Jackson, Emily Seifert, Jamila Hunter, Lauren Lynch, Lauren Proctor, Kaitlyn Williams, and they were accompanied by Matt McNeill, a 2012 graduate.

A video by students of Barry Jones, chair of the APSU Department of Art, showed throughout the evening.