Clarksville, TN – Austin Peay women’s basketball team begins the road portion of its 2014-15 slate with a 1:00pm, Sunday contest against Evansville that also will mark its first visit to the Ford Center. 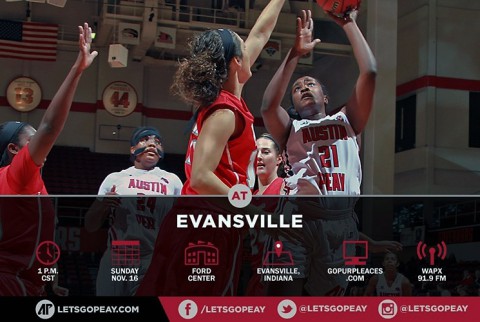 The Lady Govs opened their season with an 85-73 home loss to Wright State, Friday.

But it was Wright State’s 56-45 rebounding edge that proved the difference, particularly its 23 offensive rebounds that it turned into a 20-6 edge in second-chance points.

Austin Peay will see sophomore center Tearra Banks return after serving a one-game suspension due to a violation of athletics department rules. Her presence will bolster a frontcourt that was outrebounded and could not find an offensive rhythm, as Wright State outscored the Lady Govs 28-18 in the paint.

About the Purple Aces

Evansville was picked to finish fourth in the Missouri Valley Conference’s preseason poll, its best preseason pick since 2008-09… The Purple Aces return sophomore guard Sara Dickey, the MVC Co-Freshman of the Year and a Preseason All-MVC pick, who averaged 17.6 points and 4.2 rebounds per game last season.

Senior forward Mallory Ladd also returns after averaging 12.0 points and 9.2 rebounds per game en route to All-MVC honorable mention recognition… Those two are among four starters and six letterwinners returning from last season’s team which finished 10-8 in the MVC and received a berth in the Women’s Basketball Invitational.

Evansville used a 14-4 run in the second half to build a double-digit lead that Austin Peay could not chip into the rest of the way.

Austin Peay will have an early wakeup call for its next outing, an 11:00am, Saturday contest against Grand Canyon in the Dunn Center. It will be the first-ever meeting between the two teams in any sport.