Clarksville, TN – Andrew Shriver, a cadet with the Austin Peay State University ROTC program, was recently selected from among hundreds of candidates within the 7th Brigade to attend the U.S. Army National Combine.

The combine is held every year in San Antonio, Texas, and hosts the top 500 junior football players from high schools throughout the nation. These students are tested in various events, such as the 40-yard dash, the short shuttle and the vertical jump, and then they are placed on teams to play football. 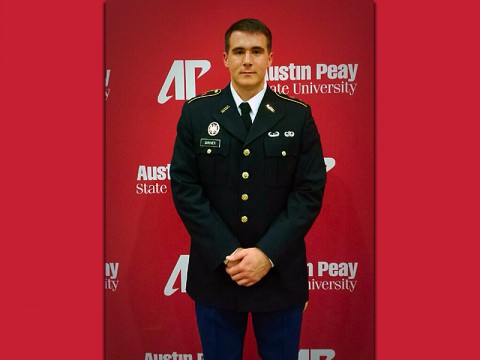 Shriver will attend the combine from January 1st-January 4th. He will grade the high school students on their performance in the evaluated events.

“I’m excited to see and possibly meet some of the nation’s rising football stars, while also representing Austin Peay and our ROTC program,” he said.

In July, Shriver participated in a four-week ROTC training program at Fort Knox, Kentucky, where he received the Reserve Officers Association Award. That award is presented to the cadet in each regiment who reflects the best traits of a leader.

Shriver, a Clarksville native with no prior military experience, is one of the reasons why the APSU ROTC program is considered one of the best programs in the nation.

For more information, contact the APSU Department of Military Science and Leadership at 931.221.6156.