Champaign, IL – Austin Peay State University men’s basketball team will have little time to heal the wounds from a heartbreaking loss to Samford.

After two long bus rides, the Governors, who lost to Samford, 68-67, Wednesday night on a last-second shot, find themselves ready to face Illinois. The Illini, a perennial Big 10 power, are off to a 2-0 start after posting a 20-15 2013-14 record and advancing to the second round of the NIT. 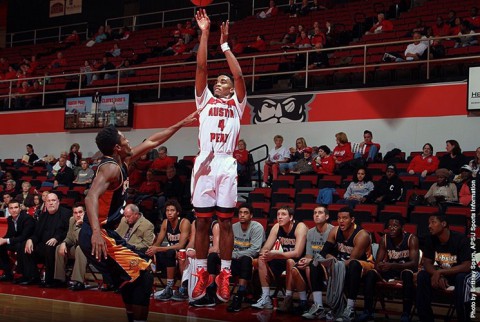 Tipoff will be 7:00pm, Friday, in the State Farm Center, more widely known as venerable Assembly Hall since 1963.

Phase 2 of the spaceship-looking arena’s $165 million refurbishment project was just completed—State Farm Insurance is paying $60 million over 30 years for the naming rights.

Friday’s contest also is a preliminary game of the 2014 Continental Tire Las Vegas Invitational as is the Govs’ Monday contest at Indiana State.

The Illini enter the contest not having lost a November contest (spanning 17 games) under third-year coach John Groce.

After the 114-56 rout of Coppin State last Sunday, the Illini have five players averaging in double figures, led by do-everything guard Rayvonte Rice, who is averaging 19.0 points and 7.0 rebounds in the season’s first two games and 5-9 guard Ahmad Starks, who  was Oregon State’s all-time three-point leader (185) before transferring.

The Governors will attempt to bounce back after erasing a 17-point lead to take the lead twice in the closing minutes, the last time on a Chris Horton bucket of an errant shots with 22 seconds left. But that was erased by Evan Taylor’s line-drive jumper—his second made bucket this season in 21 attempts.

Horton finished with 22 points and 12 rebounds while Chris Freeman battled back from a four-point first half to finish with 16 points. But the Govs inside players got little help from the perimeter—APSU shot 3-of-15 from three-point range for a second straight contest. In addition, APSU got just three points from an extremely young and inexperienced bench.

This is the fourth meeting between the two programs, the last two in then-Assembly Hall. In 2006, the Govs were manhandled by the Illini, 80-35.

But the most memorable game between the two schools came in the 1987 NCAA tournament when the Govs literally made Dick Vitale stand on his head. Illinois was considered a prime dark horse to win the championship.

The Governors took a halftime lead into intermission as the game was thrown back to the ESPN halftime studio—ESPN broadcast all the early-round games in those days.

After Tony Raye rattled home two free throws with two seconds left, the Govs walked away with a stunning, 68-67, victory in Birmingham, AL. True to his word, Vitale stood on his head in studio after the game and later reenacted it at the Governors Basketball banquet during the spring.