Nashville, TN – This week the Tennessee Titans (2-12) travel to face the Jacksonville Jaguars (2-12) in a nationally-televised game. Kickoff at EverBank Field (capacity 67,297) is scheduled for 7:25pm CST on Thursday, December 18th.

The Titans are looking to sweep the season series with the Jaguars for only the fifth time in the 20-year-old rivalry. They won the October 12th matchup at LP Field, which extended their lead in the all-time series to 23-17, including playoffs.

NFL Network will broadcast the game to a national television audience. The telecast also can be seen locally in Nashville on WZTV FOX 17. Play-by-play announcer Jim Nantz and analyst Phil Simms will call the action, while Tracy Wolfson will report from the sidelines.

Additionally, Westwood One Sports will broadcast the game to a national radio audience. Bob Wischusen (play-by-play), Brady Quinn (analyst) and Chris Doering (sidelines) will have the call.

The Titans will make their second primetime appearance of 2014 when they travel to Jacksonville. On November 17th, they hosted the Pittsburgh Steelers on Monday night and narrowly lost 27-24.

A primetime road game is rare for the Titans in recent years. Their last five night games have been played at LP Field, and the last time they traveled for a primetime contest was October 18th, 2010, when the Jaguars hosted them on Monday Night Football. The Titans won that battle 30-3.

In their history, the Titans are 4-5 on Thursday Night Football. They have never met the Jaguars on a Thursday. The Titans hope the short week brings a quicker end to an eight-game losing skid, which began on October 19th.

Their last win came at the expense of the Jaguars a week earlier at LP Field. On that day, Titans nose tackle Sammie Hill blocked a 55-yard field goal attempt by Josh Scobee in the final seconds to preserve a 16-14 victory.

Last week the Titans had a fourth-quarter lead at home against the New York Jets, but a one-yard rushing touchdown by Chris Ivory put the Jets on top with three minutes remaining on the clock. A frantic, last-second charge by the Titans ended on New York’s nine-yard line as time expired.

In the defeat, the Titans lost a quarterback to injury for the second consecutive week. Jake Locker was driven to the turf late in the second quarter by Jets defender Quinton Coples and was diagnosed with a left shoulder injury. He was placed on injured reserve the following day, and with his roster spot, the team signed veteran quarterback Jordan Palmer as a free agent.

With Locker out against the Jets, the offense turned to Charlie Whitehurst, the last of three Titans quarterbacks left standing at the time. In Week 14, rookie signal caller Zach Mettenberger went down with a right shoulder injury against the New York Giants.

The Titans will have 10 days between the Thursday night matchup with the Jaguars and their season finale. On December 28th, they conclude their 2014 campaign at LP Field against the Indianapolis Colts.

The Jaguars’ 2-12 record mirrors that of the Titans. They rebounded from their earlier loss at Tennessee to pick up their first win in Week 7 over the Cleveland Browns, and their second win came on November 30th against the New York Giants.

Last week, the Jaguars traveled to Baltimore and took a lead into halftime, only to have the Ravens rally and hand them a 20-12 setback. The Ravens capitalized on a blocked punt for a touchdown and eight sacks against Jaguars rookie quarterback Blake Bortles.

The Jaguars are in their second season under head coach Gus Bradley, who was named to his current post after four campaigns as the defensive coordinator for the Seattle Seahawks.

Titans-Jaguars Series At A Glance

LB Avery Williamson (96 tackles) needs four tackles to reach 100 tackles this season. With eight tackles, he would have more tackles than any other rookie in the “Titans era” (since 1999), surpassing Alterraun Verner (103 total tackles in 2010).

The Jaguars are the Titans’ longest-standing division rival. The clubs have met at least twice each year since Jacksonville began play as an expansion franchise in 1995. For the first seven seasons of the rivalry they played in the AFC Central, and for the last 13 years they have been members of the AFC South. The teams have met a total of 40 times, with the Titans holding a 23-17 advantage.

The majority of Titans-Jaguars contests have been highly competitive. Overall, 24 of the 40 Titans-Jaguars meetings have been decided by seven points or fewer. Such was the case in both 2013 matchups, the first a 29-27 Jaguars win at LP Field (November 10th) and the second a 20-16 triumph for the Titans at EverBank Field (December 22nd). It marked the fifth consecutive year the clubs split the season series.

In the first matchup of 2014, played at LP Field on October 12th, the Titans needed a blocked field goal in the game’s waning seconds to preserve a 16-14 win. The Titans forced two turnovers and recorded six sacks during the course of the afternoon.

The stakes of the rivalry were never higher than in 1999, when the Titans and Jaguars met three times, including the AFC Championship Game in Jacksonville. Steve McNair rushed for two touchdowns and Derrick Mason returned a kickoff 80 yards for a touchdown as the Titans earned their first Super Bowl berth with a 33-14 win. Tennessee went on to Super Bowl XXXIV and eventually fell at the hands of the St. Louis Rams, 23-16.

The Jaguars played their first game in franchise history against the then-Houston Oilers on September 3rd, 1995. Playing in Jacksonville, the Oilers won the game by a 10-3 final score.

In Week 6, the Titans defense recorded six sacks and forced a pair of turnovers to help defeat the Jacksonville Jaguars 16-14 at LP Field.

The Jaguars had a chance to kick a go-ahead field goal with 12 seconds remaining in the fourth quarter, but Josh Scobee’s 55-yard attempt was blocked by Titans nose tackle Sammie Hill to dash the visitors’ hopes. 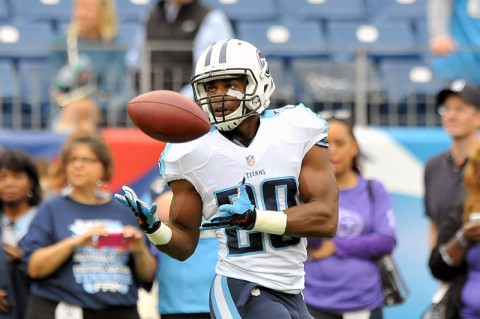 Tennessee Titans running back Leon Washington (29) catches a pass during warm ups prior to the game against the Jacksonville Jaguars at LP Field. (Jim Brown-USA TODAY Sports)

The Jaguars finished ahead of the Titans in several statistical categories, including total yards (379 to 290), third-down conversions (53 percent to 27 percent) and time of possession (31:07 to 28:53), but the Titans made enough critical plays to secure their second win of the season.

They got three field goals from Ryan Succop and a turnover-free performance by backup quarterback Charlie Whitehurst, who completed 17 of 28 passes for 233 yards. Whitehurst was in the lineup due to an injury to Jake Locker’s right thumb.

The Titans were enjoying a nine-point cushion until Jaguars rookie quarterback Blake Bortles engineered a nine-play, 83-yard drive with less than three minutes remaining in the fourth quarter. The drive ended with a 20-yard touchdown catch by tight end Clay Harbor.

With less than a minute on the clock and no timeouts, the Jaguars needed to recover an onside kick and did so, courtesy of LaRoy Reynolds. Bortles subsequently completed two passes to get the ball to the Tennessee 37-yard line, only to have Hill get his hand in front of Scobee’s game-winning attempt.

The Jaguars used a big play on the opening series to set up the first score of the day. As Bortles was being pressured by Titans defensive tackle Jurrell Casey, he floated a long pass to Harbor, who caught the ball and turned upfield for a 59-yard gain. Following an illegal contact penalty on the Titans in the end zone, Jaguars running back Storm Johnson crossed the goal line on a one-yard touchdown run.

The Titans got on the scoreboard on their second drive, totaling 67 yards on 11 plays. An 18-yard pass from Whitehurst to tight end Delanie Walker was followed by a 25-yard reception by running back Dexter McCluster. However, the drive stalled inside the 10-yard line, and the Titans settled for a 25-yard field goal by Succop.

Late in the second quarter, the Titans took the lead at the end of an eight-play, 80-yard march. Whitehurst and Walker connected for a 37-yard pass, followed by a couple of big catches by wide receivers. Nate Washington converted a third-and-four with a 17-yard reception, and Justin Hunter advanced the ball to the one-yard line on a 22-yard pass play. Fullback Jackie Battle capped the sequence with a one-yard touchdown run. 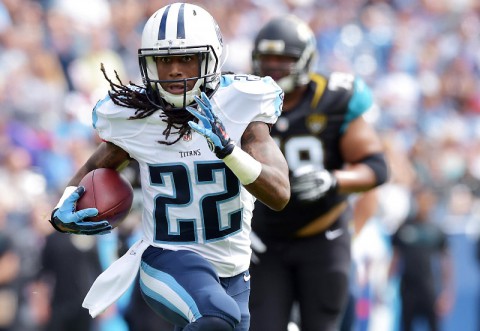 Tennessee Titans running back Dexter McCluster (22) carries the ball against the Jacksonville Jaguars during the first half at LP Field. (Don McPeak-USA TODAY Sports)

To begin the second half, Tennessee used 50 total yards by running back Bishop Sankey during a drive that went to Jacksonville’s three-yard line and ended with Succop’s 21-yard field goal.

The Jaguars responded, as Bortles and his teammates navigated into scoring territory.

However, on a pass intended for wide receiver Allen Hurns, cornerback Blidi Wreh-Wilson came up with an interception and returned the ball 34 yards to set up Succop’s third and final field goal, this time from 42 yards on the second play of the fourth quarter.

The Titans’ second takeaway likewise ended a good scoring chance for the Jaguars. With 4:39 on the clock, Shorts took a pass from Bortles 16 yards to the Tennessee 10-yard line before cornerback Jason McCourty pried the ball loose. Linebacker Avery Williamson scooped up the ball and went 41 yards the other direction as the clock ticked toward the four-minute mark.

The Titans went three-and-out, but they forced the Jaguars to use their last timeout, setting in motion the dramatic final three minutes.