This will be the second time in eight days the two teams have met. A week ago Saturday the Bisons came to Clarksville and defeated the Govs, 69-58. 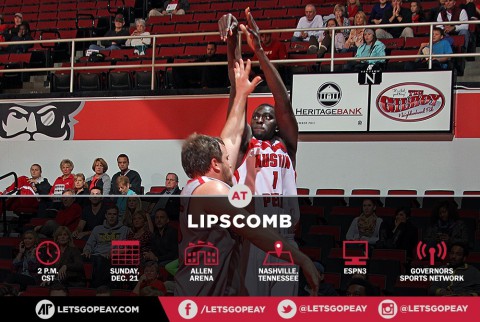 Since then the two have headed in opposite directions as both sport 4-7 records.

The Govs rebounded from that disappointing loss to defeat Troy, 73-70, Monday, and Oakland City, 76-52, Thursday.

Lipscomb, meanwhile, suffered a pair of difficult road losses, the first at 106-61 defeat at Texas, Tuesday, before dropping a 77-55 decision at Princeton, Friday night.

But the Bisons come home knowing they have enjoyed recent success against the Governors. Since resuming the series in 2010, Lipscomb has won all six meetings.

In the most recent contest the Bisons held the Govs to a season-low 33.3 percent (16 of 48) from the floor. The Governors failed to help themselves by shooting only 22 of 36 (61 percent) from the free-throw line.

It was a game that saw APSU’s two inside people, Chris Freeman [1] and Chris Horton [2], limited to just 12 totals points. Freeman left Thursday’s game in the first half against Oakland City after suffering a cut over the eye and a chipped tooth after a sideline collision. He didn’t return against the Mighty Oaks.

The Govs, however, received a welcomed lift from freshman guard Josh Robinson [3], who knocked down seven three pointers in scoring a career-best 23 points. Horton, who bounced back with a double against Troy, continued his surge with 13 points and 14 rebounds against Oakland City.

Senior guard Ed Dyson [4] seemingly has found his niche, scoring 21 points in the first Lipscomb contest while averaging 16.3 points per game in the most three recent games.

Guard Josh Williams lead Lipscomb, averaging 14.3 points per game, while Malcolm Smith comes in at 14 points and 6.3 rebounds per contest.

The Series: This is the 71st meeting between the two programs, with APSU leading the series 39-31. After a 47-year break the series resumed in 2010 and APSU has dropped all six meetings, including the December 13th contest, 68-59 in Clarksville, TN.

Govs On The Web