Nashville, TN – Road construction won’t delay travelers during the Christmas and New Year’s holidays. The Tennessee Department of Transportation is once again halting all lane closure activity on interstates and state highways in anticipation of higher traffic volumes across the state. 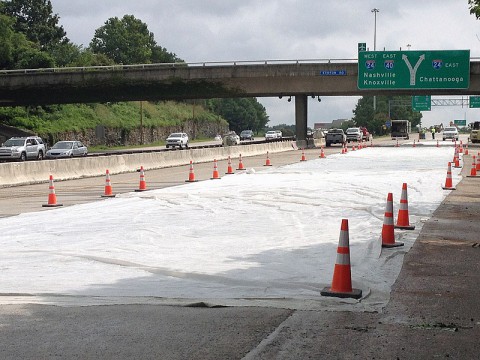 No temporary lane closures will be allowed for construction on Tennessee roadways beginning at noon on Tuesday, December 23rd, 2014 through 9:00am on Monday, January 5th, 2015.

“With two million drivers expected to travel Tennessee roadways during the Christmas and New Year’s holidays, it’s imperative that we do everything possible to keep traffic moving and minimize congestion,” said TDOT Commissioner John Schroer. “We also want to keep our roadways safe. Our law enforcement partners will be out in full force, so wear your seatbelt, reduce your speed, avoid distractions, and don’t drive if you’ve been drinking.”

Except for a few long-term closures which must remain in place for safety, all construction related closures will be suspended during the holiday period.  Workers may still be on-site in some construction zones.  Drivers should obey all posted speed limits, particularly in construction areas.  Slower speeds are necessary in work zones due to the temporary layout of the roadway and will be enforced.  Drivers convicted of speeding through work zones where workers are present face a fine of $250.00 to $500.00, plus court fees and possible increased insurance premiums.

AAA predicts holiday travel will increase about 4.8% in Tennessee this year, with two million expected to travel by automobile in the volunteer state between the Christmas and New Year’s holidays. Across the U.S., 89.5 million people are expected to drive to their holiday destinations. The year-end holiday season should see the highest travel volume since 2001, and Christmas day gas prices should be the lowest since 2008.

Updated travel and construction information can be found on the TDOT SmartWay website at www.tn.gov/tdot/tdotsmartway [1] or you may call 5‑1‑1.  You can also receive traffic alerts via TDOT’s multiple Twitter feeds, including statewide traffic tweets @TN511 or any of TDOT’s other Twitter pages.

As always, drivers are reminded to use all motorist information tools wisely and Know Before You Go! by checking travel conditions before leaving for their destination.  Drivers should never tweet, text or talk on a cell phone while behind the wheel.