Fort Campbell, KY – Two Fort Campbell police cars sped with their blue lights on to a barracks complex off of Fifth Street. As the cars came to a stop, four military police exited their vehicles, and rushed for the building. They stacked up at the side door, not knowing what was waiting for them inside of the building.

The Soldiers were one of multiple groups of military police taking part in an active shooter scenario during the Military Police’s law enforcement training December 5th at Fort Campbell. Lurking inside the building in its dark halls were a group of role players from the 163rd Military Police Detachment and members of the Fort Campbell Special Reaction Team – the military equivalent of a SWAT team along with a trainer from the Department of the Army civilian police. 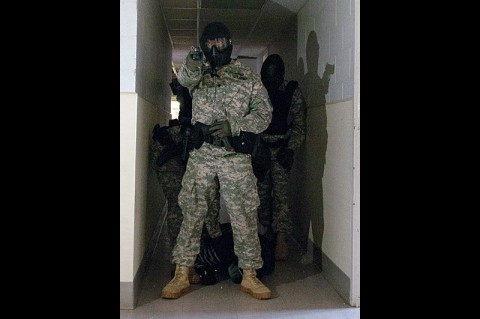 Some of the role players were portraying victims, while others were the active shooters during the scenario. As the first responders entered the building, a blank round went off and then chaos ensued.

The military police had to determine whether the role players running down the hall were hostile or not, all while taking fire from a Soldier portraying an active shooter using an airsoft gun.

The pellets would sting if they hit anywhere besides the Soldiers bullet proof vests or paint ball masks they wore for the training. As they rushed the hall, they passed other role players, representing wounded civilians.

The MPs pushed passed the civilians and engaged with the active shooter; however, the scenario had a second active shooter hiding in one of the many rooms in the cramped hallway. The second shooter attacked them from where they had just entered. The MPs had to engage and neutralize the new threat, then complete their sweep of the training area in the building.

“The purpose of the training is to just have a better understanding of active shooter scenario, just in case one were to happen here on Fort Campbell,” said Sgt. Kristian W. Bale, an MP assigned to the 561st Military Police Company, 716th MP Bn., and one of the Soldiers participating in the training. “There were civilian casualties, civilian personnel in the building that we had to avoid harming while we searched for an active shooter in the building, and we had to close with the shooter, find out where he was located in the building, and eliminate that threat, at the same time while protecting the civilians and everyone else that was in the building.”

Although, the scenario featured a difficult and dangerous situation, it’s part of the standardized law enforcement training process according to Officer Thomas Keys, a member of the Department of the Army civilian police and one of the primary instructors for the training.

“We have people from different units, we have specialized sections – FBI, traffic, CID – and you have civilian police working with military police also, so we have to make sure they all know the same things, all train the same way that way they can come together,” said Keys. “So usually what we’ll do is make the first scenario very hard and we try to distract them.

“We notice a lot of times that we can divide their attention and separate the team, which is one of the things they don’t want to happen. Hopefully they’ll be pretty rough on them. It is a winnable scenario though.”

After the scenario, Keys led each team outside and they talked about the scenario. After doing some verbal training with Keys, the teams go through another scenario.

“The second run is better,” said Keys. “Usually the communication is a lot better and they pick up on some of the things that we tell them about.”

Communication is one of the two most things Keys stressed to the Soldiers during the training.

“The most important things they need to take from here is one, they have to have good verbal communication with one another and 360 [degree] security,” said Keys. “Therefore they can go into the building, hopefully stop the threat and exit without being injured themselves.”

The second scenario only involved a single shooter, but the teams didn’t know that. They started over. The approached the building, entered it then they still had to approach each room in the hallway as if they contained danger. If the teams weren’t already calling out directions, they would do it on the second scenario so each four-person team moved with a singular purpose.

After neutralizing the threat, they still had to clear the entire training area. Each corner presented a threat and they had to work together to ensure they maintained 360-degree security. At the end of the training they would review all that happened in the scenario and discuss how to apply the training.

The law enforcement training prepared MPs to come together as a team, even if it was the first time they’d met. Using standardized tactics honed through tough scenario based training that tried to realistically simulate an active shooter on the post, the MPs gained confidence they could neutralize this threat if it ever happened at Fort Campbell.

“I say today’s training is fairly realistic. It puts us on our A game and helps us to have a better understanding of how many different scenarios and possibilities there are out there,” said Bale. “I feel that I would definitely be confident in responding to it due to the training we got here today from the special reactions team on Fort Campbell.”