Dover, TN – Clarksville Academy’s boys basketball team only trailed Stewart County High School by three points heading into the final quarter, Monday, December 29th at the Bill Craig Memorial Gymnasium in the final day of the Rebels Christmas Classic, but they were outscored 18-7 in the final stanza to come away with a 65-51 loss.

The Cougars (3-8) entered the final quarter only down three points, 47-44, but only scored one point in the first four-and-a-half minutes of the fourth quarter, as the Rebels (8-8) extended their lead out to eight points, 53-45 with 3:31 left. 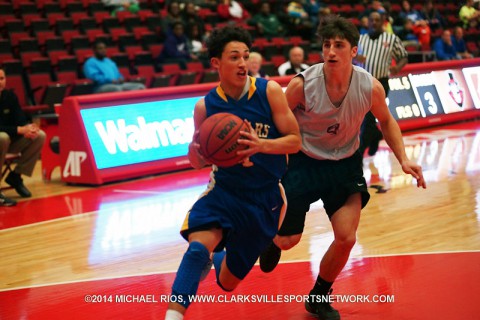 Clarksville Academy would cut the Rebels lead down to six twice including for the final time at 55-49 with 1:48 left following a bucket by Austin Fisher.

Fisher would lead the Cougars with a game-high 23 points.

But that would be as close as they would get the rest of the way, with Stewart County outscoring Clarksville Academy 10-2 over the game’s final 1:41 to come away with the 14-point victory.

The lone points in that final stretch from Clarksville Academy came on a basket by Kennie Wade, with 55.3 seconds left.

Wade recorded 14 points against the Rebels.

In the first half, Stewart County jumped out to a 12-5 lead – powered by 3s from Rye Nolen and Patrick Craig – before Clarksville Academy tied the game 12-12 in the first minute of the second quarter.

The Rebels would answer the Cougars tying field goal with an 8-0 run to build its biggest lead of the first half at 20-12.

Clarksville Academy would respond with a 13-7 burst – powered behind seven points scored by Wade – to get back to within one point, 26-25 with 2:01 left in the first half, but the Cougars wouldn’t score again in the first half and trail the Rebels 29-25 at intermission.

The third quarter would see Clarksville Academy get hot from behind the three-point arc, knocking down four from distance, to tie the game on three different occasions – including for the final time at 44-44 on a three by Fisher with 15 seconds left.

But it would be Stewart County that would have the final three of the period, with Craig banging in a three at the buzzer to end the quarter and give the Rebels a lead they would never relinquish.

The Cougars are off until after the new year, when they return to action on January 3rd with a 7:30pm home contest versus Greenbrier High School.