APSU Governors Basketball comes from behind to beat North Florida, 65-60 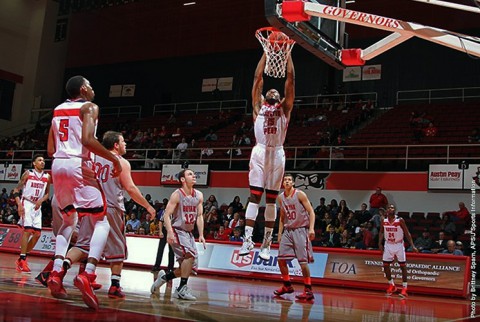 The victory improved the Governors to 5-8 on the season while North Florida dropped its second straight to an Ohio Valley Conference team, slipping to 7-8—the Ospreys are 0-3 against the OVC this year.

Freeman came alive in the second half, scoring 15 of his 23 points as he connected on 6-of-8 field goal attempts.

After a first half that saw APSU shooting just 43.3 percent, including 1-of-7 from three-point range, the Govs concentrated on getting the ball inside to Horton and Freeman.

That effort intensified during the game’s final 12 minutes when Zavion Williams [3] entered for the first time since December 6th with a knee injury. Williams’ ability to get into the lane and deliver to Horton, who had a team-high four assists, and Freeman, proved decisive in the rally.

In fact, he entered the game with the Govs trailing 47-42 and after Williams missed a three pointer in his first offensive trip, APSU scored on seven of its next 10 offensive possessions. It included a pair of Freeman conventional three-point plays, both set up by Williams’ passes. The second three-point play with 3:04 left gave APSU the lead for good, 60-57.

However, that lead was precarious in the game’s final minutes. Leading 61-60 with 1:23 left, Govs’ freshman Josh Robinson [4] had a shot roll out and in the ensuing scramble North Florida ended up with the basketball. The Ospreys got the ball inside to Chris Davenport, who went up for a go-ahead dunk over Freeman. However, the APSU senior forward rejected the shot and Horton ended up with the rebound with 1:08 left.

Again Robinson ended up with the basketball with the shot clock winding down. He drove the lane but this time dished to Freeman, who laid it in to give APSU a 63-60 advantage with 34 seconds left. The Ospreys had two chances to tie the game on the next possession, but after making 7-of-10 three pointers in the first half, they failed to connect on two straight in a span of five seconds.

After the second miss, Khalil Davis [6] grabbed the rebound and was fouled with nine seconds left. Davis, however, missed both free-throw attempts. But Horton came across the lane to grab his 10th rebound and immediately dished it to the better free-throw shooter, Williams, who made both free tosses to seal the deal.

APSU’s defense limited the Ospreys to 31 percent (9 of 29) in the final half and overall 37.5 percent—North Florida was 0-of-11 from three-point range in the second half.