Posted By Clarksville Online News Staff On Saturday, January 3, 2015 @ 2:30 am In Technology | No Comments

Houston, TX – Students from Connetquot High School in Bohemia, New York, used astronaut imagery of Earth to compare impact craters on Earth with those on other planets. The images were provided through the Expedition Earth and Beyond [1] (EEAB) program, which connects students in grades 5 and higher with pictures taken by astronauts aboard the International Space Station [2].

“The images provide a hook for students to formulate questions, think about how to collect and analyze data, and then draw their own conclusions,” says EEAB Director Paige Graff. “The whole idea is authentic science you can do in the classroom, to give students an experience based on their interests and motivation.” 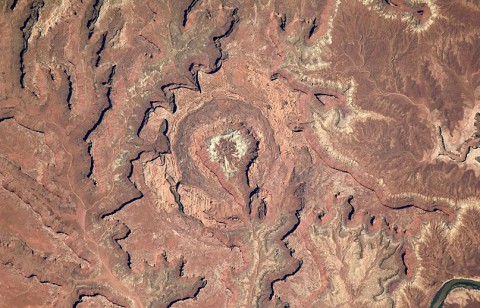 Teachers have used the images to help students grasp geographical, geological, environmental and other concepts.

In addition to comparing features on Earth to those on other worlds, student investigations have analyzed changes in Earth’s glaciers, bodies of water and shorelines using images taken of the same place over time.

Almost 1.5 million images taken from the station are currently publicly available as potential fodder for student science investigations. The EEAB database includes cataloged images with a center point searchable by latitude and longitude.

Students can also search uncatalogued imagery, sourced by the station’s nadir point –the point on Earth directly below the station – when the photo was taken. Because the astronaut could have pointed the camera in any direction from that point, those images could fall anywhere within a circle hundreds of miles around it. 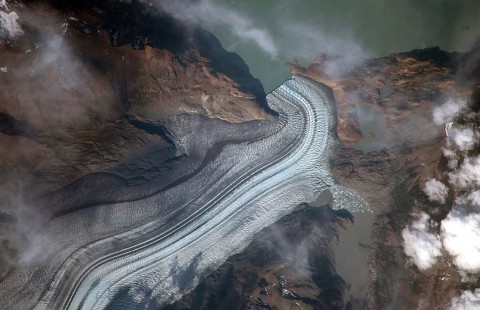 Students from Evergreen Middle School requested this image of Viedma Glacier for their investigation. (NASA)

Students can even request astronauts take a specific image to support their investigation, as Connetquot did. This models the process by which professional scientists acquire new data, Graff points out. “Students start with existing data and, if they discover that they need additional data to support their research, can submit a proposal to the Crew Earth Observation target stream to request that an astronaut collect that data.”

This creates a powerful, direct connection between students and astronauts in orbit.

The program also connects students with NASA scientists and experts through EEAB’s interactive Classroom Connection Webinars [4]. These free, online events encourage students to craft questions they could answer using Earth and space imagery and show them how scientists use this imagery to conduct their own investigations.

In October 2014 an EEAB webinar, “Investigating Earth Using Astronaut Imagery from Space,” reached about 1,500 students. To date, classrooms in 35 states across the U.S. have participated in webinars. 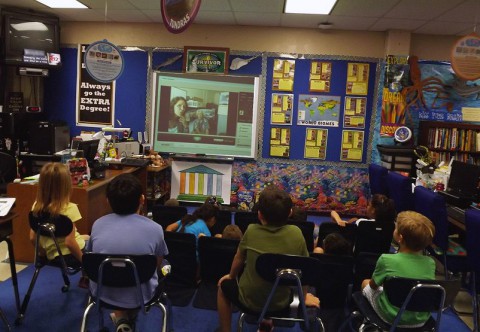 While there are many sources of images from space, those from the station offer unique qualities for scientific investigation.

For one thing, most remote sensing instruments circle Earth in polar orbits, explains William Stefanov, Ph.D., associate International Space Station Program scientist for Earth Observations at NASA’s Johnson Space Center [7] in Houston, TX. Those pass over the same spot on Earth at roughly the same time of day only once every two weeks or so, which limits their ability to capture a dynamic event like an eruption or tsunami.

The space station, on the other hand, has an inclined equatorial orbit, passing over the same point on Earth multiple times a day, at different points during day and night. This makes it possible to capture dynamic events and to record processes taking place at different times, such as creation of afternoon fog banks. Because the station orbits at a lower altitude than most satellites, astronauts are able to take higher resolution images, too.

EEAB is facilitated by the Astromaterials Research and Exploration Science (ARES [7]) education program, housed at Johnson. Images produced by hand-held astronaut photography used to enthuse and train the next generation of scientists–now that makes a real impact.

[1] Expedition Earth and Beyond: http://ares.jsc.nasa.gov/education/eeab/index.cfm