Clarksville, TN – It was Senior Night Wednesday, January 7th in William Workman Gymnasium at Clarksville High School. In addition to paying tribute to the 12 graduating senior wrestlers, the Wildcats hosted a triangular meet against the Rossview Hawks and the Fort Campbell Falcons.

However, instead of celebrating victories at their last home meet, the Wildcat seniors suffered defeats against both the Hawks and the Falcons. 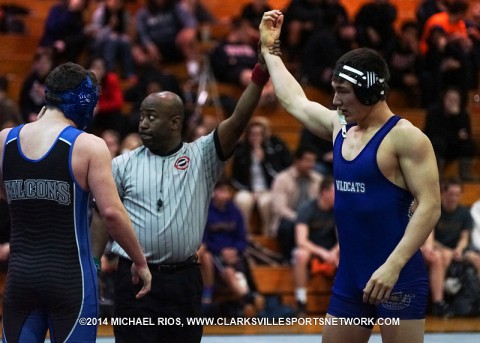 The Falcons improved to 7-7 with an opening loss to the Hawks, 58-19, followed by a narrow 40-39 win against the Wildcats. The Hawks picked up two wins, defeating the Wildcats, 37-25, after grounding the Falcons in the opener.

Although only two of the Falcon’s four wins were by pins, they had the most impressive performance. Heavyweight David Nikolao pinned his opponent in nine seconds.

The Falcons bounced back to win their match up against the Wildcats. They snatched the win from the Wildcats in the last match. Forfeits in five weight classes gave the Wildcats an early 34-12 lead. But five straight wins, including four pins, narrowed the gap down to 39-34 with one match to go.

Fort Campbell’s Gino Haywood squared off against Clarksville’s Chris Kiser at 170. Haywood got the pin on Kiser and gave the Falcon’s the 40-39 win.

After their narrow loss to the Falcons, the Wildcats finished the night against the Hawks. The Hawks earned wins in eight weight classes, four by forfeits. The Wildcats won six matches with two by pins.

Wildcat senior Clay Cook(152) got one of the two pins. Cook won by forfeit in his first match against the Falcons.