The Governors, 5-10 on the season and 0-8 on the road, are coming off a disappointing 71-59 loss to Jacksonville State in their OVC opener. 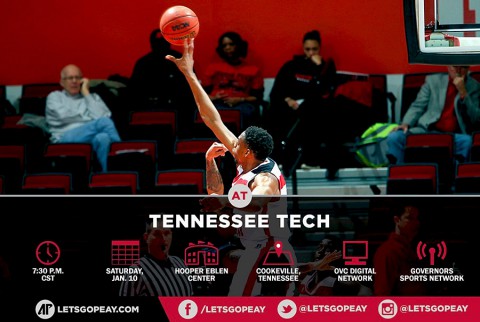 It was the fourth time this season APSU scored fewer than 60 points.

The offensively challenged Governors, who converted just 23 of 61 (37.7 percent), have now shot less than 40 percent from the floor in eight games this season.

After connecting on just 2-of-14 from three-point territory, the Govs are now shooting just 29.4 percent from behind the arc.

APSU also committed 15 turnovers, including nine in the first half, adding to their offensive issues.

Center Chris Horton [1] seemingly was the only Gov to avoid the offensive potholes, scoring 19 points and grabbing 13 rebounds for his season’s eighth double-double.

In addition, Damarius Smith [2] made his first appearance after a half-seasons athletic department suspension. He scored seven points, dished out eight assists and collected three steals, but he also had five of the Govs’ nine first-half turnovers.

If the offensive woes were not enough, the Governors got off to a slow start defensively against JSU, allowing the Gamecocks to shoot 55 percent in the first half as APSU trailed by 13 at intermission.

The Govs regain their defensive mojo in the second half, limiting the Gamecocks to just 27.6 percent (8 of 29) shooting. They will need that defensive intensity against a Tennessee Tech club that has one of the league’s top inside games.

Tennessee Tech was considered one of the OVC surprises in non-conference action, fashioning an 8-5 record, including impressive road wins at UMKC and North Florida to go with victories against Chattanooga and Southeastern Louisiana.

But the Golden Eagles, who lost 83-67 to Murray State, Thursday night, have gotten off to a 0-3 OVC start because they also have struggled offensively.  They are averaging just 62.7 points per game—nearly 10 points less than their overall average—in their three league tilts, shooting just 37.4 percent from the floor.

On the other end, Tennessee Tech is permitting opponents to shoot 47.4 overall but 45.3 percent from the perimeter.

The Series: This is the 138th meeting between OVC members Austin Peay and Tennessee Tech, with the Govs trailing by a narrow 68-69 margin. APSU won last season’s meeting Clarksville, 83-69. That stopped a five-game Golden Eagles winning streak. APSU’s last win in Cookeville came in 2009, 86-80.

What A Loss Would Mean: The Govs would fall to 5-11 overall..they would open 2015 with three straight losses…it would leave the Govs 0-9 on the road…the eight-game road losing streak would be Austin Peay’s longest since the 2012-13 campaign…the Govs would open OVC play at 0-2…it would make the Govs 68-70 all-time against the Golden Eagles… Loos would drop to 470-415 overall and 388-362 as the Governors head coach.