Clarksville, TN – The Kenwood Knights (12-5, 5-1) rallied from eight points down in the fourth quarter to tie the game and send it into overtime Friday night at Kenwood High School. However, in overtime the rally came up short. The Rossview Hawks (9-6, 1-5) held off the Knights in overtime, 51-50, for their first district win.

The Knights came into Friday night’s game on a five game winning streak and undefeated in district play. The Hawks smothering defense held the Knights offense to a season low 40 points in regulation time. For the first three quarters the Knights scored single digit points and trailed the Hawks 31-23 going into the fourth. 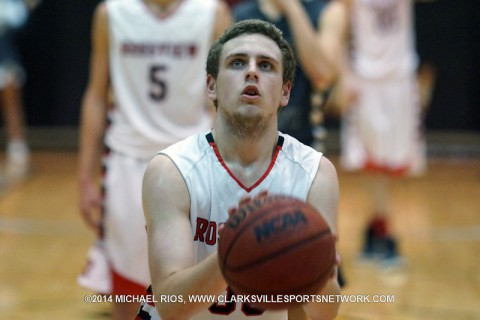 After four lead changes, Cannon Campbell made two free throws with 3 seconds left on the clock to the game at 40. After a missed last second shot by the Knights, the game went into overtime.

After Parker’s free throws, the Knights got the ball past half court and were forced to take a timeout with 1.8 seconds remaining. After the timeout, the Knights committed a turnover while trying to inbound the ball. Forced to foul, they still had less than two seconds to get a rebound and score to tie or win the game.

Campbell missed the ensuing free throw and the Knights got off a last second shot. But, the shot missed and the Hawks escaped with the win.

Campbell was one of six Hawks to score in the game. He scored eight points. Austin Jackson led the team with 14 points. Jackson scored five of the Hawks 11 points in overtime. He also made four of the teams eight total 3-pointers.

The Hawks shot 8-of-9 from the free throw line in the second half of the game, including a perfect 6-of-6 in the fourth quarter. The Knights made 11-of-17 free throws in the game. They out-rebounded the Hawks 23-13, but committed 15 turnovers.

With the win over the Knights, the Hawks have won four of their last five games.