Clarksville, TN – Since the holiday break, the Rossview Hawks (10-6, 2-5) have been soaring. Tuesday night their flight continued over the West Creek Coyotes at West Creek High School. The Hawks earned their second district win over the Coyotes, 49-40.

A strong Hawks defense added to miscues and poor offensive execution in the second and third quarters for the Coyotes. They scored just 10 points in the two quarters after scoring 10 points in the first quarter. This was only the third time this season they were held to 40 or less points. 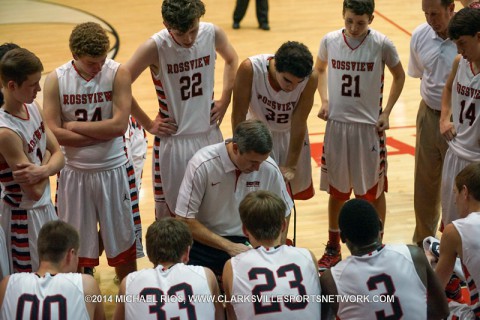 Down, 37-20, after three quarters, the Coyotes rallied behind a full court press to generate turnovers and score 20 points in the fourth quarter. However, the Hawks made enough free throws to maintain their lead and secure the win. All of the Hawks 12 fourth-quarter points came from the free throw line.

Cannon Campbell made 10 of those free throws in the fourth quarter. He scored 13 points in the game and was one of six different Hawks’ scorers. Christian Snell scored 11 points and Javon Vaughn added 10.

A.J. Robinson scored nine of his total 13 points in the fourth quarter for the Coyotes, including seven of their last 10 points. He and Aaron Hardison combined for 15 of the Coyotes 20 fourth quarter points. Hardison and James Johnson finished the game with seven points.

The Coyotes trailed the Hawks by only three points, 10-13, after the first quarter. However, turnovers let the Hawks open the second quarter with a 7-2 run that included a 3-pointer by Jay Glenn. Glen made two, 3-pointers in the game.

Vaughn made the Hawks other two, 3-pointers. After his second one, Snell made a layup off a Coyotes’ turnover to give the Hawks a 25-14 halftime lead. The Hawks largest lead was 17 points after Clayton Spence capped off a 6-2 run at the end of the third quarter by making a free throw to covert a three-point play.