Clarksville, TN – In basketball, the phrase buzzer beater conjures images of long jump shots from behind the three-point arc or half court as the last seconds of the clock wind down. Friday night at Kenwood High School, the Knights suffered their third straight district loss to the Henry County Patriots, 42-44, due to a buzzer beater. However, this game winning shot was not a long 3-pointer.

The game was tied at 42 with four seconds left on the clock when Angel Hall missed two free throws that would have given the Knights a lead. 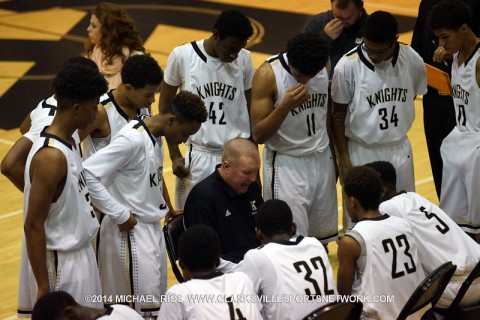 The Patriots grabbed the rebound from the second missed free throw and launched a full court pass to Alex Pope who was streaking toward the basket.

Pope caught the pass, avoided a Knight’s defender and took the shot from less than two feet from the rim. The shot missed and the ball rolled off the rim. Conner Boley snagged the ball coming off the rim and put it back up in the net as the final buzzer sounded.

Everyone froze for a split second until one of the referees signaled the basket was good. The Knights were stunned and the Patriots erupted in celebration.

After shooting 1-of-8 from downtown in the first half, the Patriots shot 4-of-5 in the second half, including 3-of-4 in the fourth quarter. The Patriots were down 28-40 when they made three, 3-pointers in a row at the beginning of the 12-2 run that would tie the game.

Josef Neumiar made two-of the three straight with 2:21 remaining in the game. Nate Kendall made a free throw to complete a three-point play with 23 seconds left in the game. Then, Russell Malik drove the length of the court and made a layup to tie the game. A foul called right after Malik’s layup put Hall on the line with four seconds remaining.

The Knights took the lead in the first quarter and had held it until that point. They were outscored by the Patriots 18-8 in the last quarter. The Knights shot 6-of-15 from the free throw line, including 1-of-3 in the final period.

Boley finished the game with a double-double, 13 points and 12 rebounds. Neumiar led all scorers with 15 points. The Patriots shot 45 percent from the field (18-of-40) and were 5-of-13 from downtown. They out-rebounded the Knights 27 t0 17.

Shavrick Martin led eight Knight scorers with 11 points. Tyree Boykin scored 10 and Angel Hall added seven points. They shot 54 percent from the field (15-of-28) including 6-of-15 from three-point range.