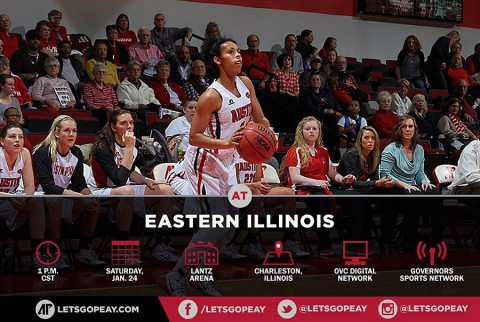 The Lady Govs return to the road looking to rediscover their mojo. After opening OVC play with a 3-1 mark, including back-to-back road wins to start the campaign, Austin Peay ended its three-game homestand with back-to-back losses – in overtime to Tennessee State, Saturday, followed by a Monday loss to Morehead State – to level its league record at 3-3.

Scoring hasn’t been a problem for APSU as it has scored more than 70 points in five of its six league outings.

However, the Lady Govs have battled the turnover bug in OVC action, averaging 19 giveaways a game – nearly 23 percent of its possessions ending with a turnover – and losing the turnover battle five times in six contests.

Eastern Illinois returns home after posting a 1-2 record during a three-game road trip. The Panthers opened that road trip with an impressive 68-42 win at Eastern Kentucky, January 15th, but fell at Morehead State, 67-62, before suffering an 81-51 loss at league-leading UT Martin, Tuesday.

Austin Peay’s win at Eastern Illinois was its first since 2007, ending a six-game losing streak at Lantz Arena. The Lady Govs led by 14 points with four minutes left, but had to hang on for the eight-point win when it couldn’t consistently convert from the free throw line in the closing minutes.

One month later, Eastern Illinois would escape Clarksville with a victory. In the closing moment’s a Sabina Oroszova jumper gave the Panthers a three-point lead only to see Gray hit a layup to cut the deficit to one.

The following Panther possession, Oroszova missed a three that gave Austin Peay a chance to take the lead with under a minute left. With the clock moving toward ten seconds remaining, Gray got a good look on a jumper from the elbow that bounced off the rim to Oroszova.

Gray got another chance after Oroszova made one-of-two from the line; the Lady Govs got the ball back with less than six seconds left, but Gray’s desperation 25-footer bounced away, allowing the Panthers to escape the Dunn Center with a win.

Oroszova led the Panthers with 24 points, but was held below her OVC-leading rebounding total; finishing the night with eight rebounds. Jordyne Crunk (14 points) and Morgan Palombizio (11 points) were also in double figures for Eastern Illinois.