Haley Bearden, who finished with a game-high 20 points, would come off the bench to key the opening salvo for the Lady Wildcats (14-9, 8-2 District 10-AAA) scoring the final five points of the game-opening 10-point run. 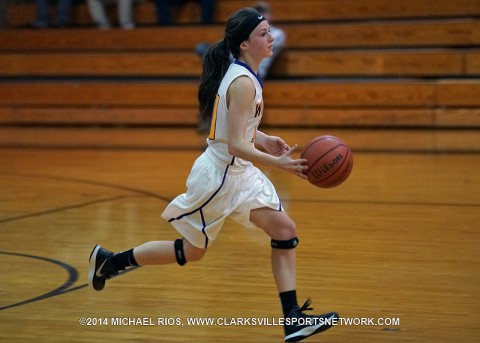 Sharisa Kimble would get the Lady Knights (6-15, 3-7 District 10-AAA) on the board with a bucket at the 1:21 mark, as Kenwood closed the first period by outscoring the Lady Wildcats 7-2 to head into the second quarter down 12-7.

A three by Jasmine Johnson – her second of the game – got Kenwood to within two points, 12-10, just 20 seconds into the second quarter, but that would be as close as the Lady Knights would get the rest of the way.

JK Cummings and LaPrasha Fair would combine to score the next the next nine points of the game for Clarksville High to extend its lead back out to double figures, 21-10 with 5:39 left before halftime.

Kenwood would cut the margin back under 10 points a couple of more times, including the final time, 25-17 at the 2:47 mark of the period, following four straight free throws by Johnson – who led the Lady Knights with 12 points.

But Clarksville High would close out the opening half by outscoring Kenwood 8-2 over the final two minutes to take a 33-19 lead into intermission.

The Lady Wildcats would carry the momentum of that final scoring run of the first half into the third quarter, as they extended its lead out to as many as 20 points, 46-26, following back-to-back 3s by Cummings and Summer Morales-Torres with 3:30 left in the period, with Kenwood never getting any closer than 15 points the rest of the quarter before CHS took a 51-31 lead into the fourth quarter.

In the final eight minutes of play Kenwood never got any closer than 17 points, including for the last time, 55-38, after a bucket by Mikeala Smith, with 4:23 left in the contest.

But Clarksville High would close out the game by outscoring Kenwood 11-5 over the final four minutes – including six from Chrislen Brown — who finished with a season-high 11 points, as the Lady Wildcats pulled away for the 66-43 victory.