Clarksville, TN – It was Senior’s Night at Clarksville High School Friday, February 6th, and the Clarksville Wildcats basketball team gave its seniors a lot to cheer about at their last home game of the regular season. The Wildcats pounced on the Henry County Patriots and thoroughly brought them down with a 62-35 victory. 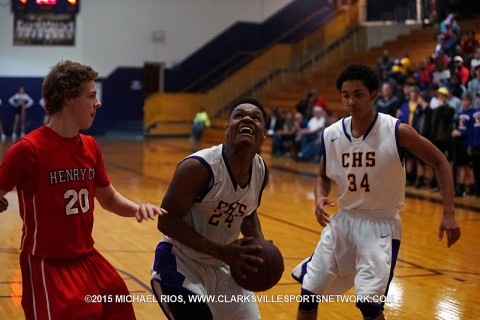 Teal Young led all scorers with 17 points. He was one of nine Wildcat scorers. J.J. James was right behind Young with 15 points.

Connor Boley led eight Patriot scorers with 10 points. The rest of the team scored six or less. The Patriots made only five goals from the field in the second half of the game and shot 8-of-14 from the free throw line.

The Wildcats won the last three games of the season, finishing with a 12-11 (9-5 District 10-AAA) record. That also puts them in a three way tie with the Kenwood Knights and the Northeast Eagles. However, the Knights swept the Wildcats, giving them the tie-breaker and second place in the district.

The Eagles and Wildcats split games this season. As a result they will get a home game in the first round of the District 10-AAA Tournament next week, finishing with the third or fourth place ranking.