Clarksville, TN – With his junior season winding down, Austin Peay men’s basketball standout Chris Horton is starting to pile up some impressive numbers, that by the end of his senior campaign may put him in the realm among some of the best to ever wear the Governors uniform.

This past weekend versus Tennessee Martin, Horton not only became the 33rd Austin Peay basketball player to score at least 1,000 points in a career, but just the seventh player all-time to have at least 750 rebounds to go with those points. 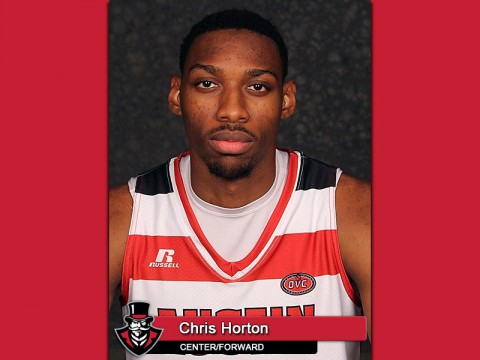 The other Govs to post those two combined milestones are APSU Hall of Famers Tom Morgan and Otis Howard, along with Drake Reed, Reggie Crenshaw, Tommy Brown and Ralph Garner.

Barring injury between now and the end of his senior season, Horton should join an even more exclusive club with Morgan, as the only two basketball players in school history to have at least 1,000 points and 1,000 rebounds in a career.

Horton is currently fourth all-time in rebounding (784) and is on the precipice of becoming the school’s all-time leader in blocked shots, needing five to pass Josh Lewis’ total of 253 career blocks – which will also move him into second-place all-time in OVC history also behind only Tennessee Tech’s Lorenzo Coleman.

Horton has already become a member of a select group of two in APSU history to record a triple-double – coming on November 16th, 2014 versus – when he authored a 15-point, 13-rebound, 10 blocked shot performance against Berea and joined APSU Hall of Famer Trenton Hassell as the only pair to accomplish the feat.

It was also just the 10th time in Ohio Valley Conference history that a men’s basketball player had recorded a triple-double and the first since the 2008-09 season.

The key to all of these accomplishments for Horton has been his consistency.

In fact, Horton is on his way to average a double-double of a season for the second straight season, while just missing out on a double-double season as a sophomore with 9.5 rebounds per game.

He also holds the school record with five straight games with a double-double.

There are four games left in this regular season — including a final home game at the Dunn Center versus SIU Edwardsville on February 26th – for Govs fans to see Horton play before he heads into the off season to prepare for what hopes to be a great senior year and continued ascent up the ranks of the all-time greats to wear the Austin Peay red and white.