Murray, KY – Facing a ‘win and you’re in’ scenario, Austin Peay State University women’s basketball team couldn’t quite get over the hump, falling to Murray State, 72-67, Saturday, at the CFSB Center.

The Lady Govs battled back to take the lead in the game’s final moments, but were unable to sustain their success and keep the Racers from scoring in the end. 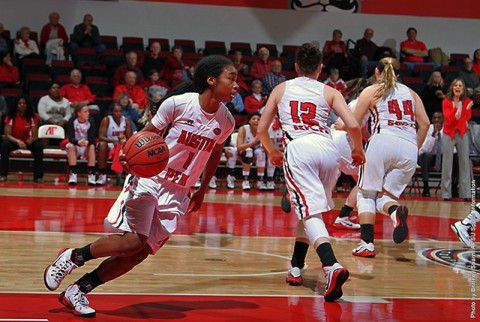 “We’ve got to get stops, and that’s the one thing we weren’t able to do,” said head coach Carrie Daniels [1]. “When you’re able to make up some ground, you have to be able to take control of the ballgame.”

The Lady Govs faced adversity before they even departed Clarksville, TN. A flat tire caused the bus to arrive late to pick Austin Peay (9-19, 6-9 OVC) up at the Dunn Center, delaying the game by more than 90 minutes.

Perhaps that helped explain the sluggish start the Lady Govs experienced in the first half, when Austin Peay shot a ghastly 29.7 percent (11-for-37) from the floor, with only juniors Tiasha Gray [2] and Jennifer Nwokocha [3] able to knock down more than one shot from the floor in the opening half.

Austin Peay concluded the half by missing 15 of its final 17 shots from the floor; fortunately, the Racers were only able to manage a 32.4 percent (12-for-37) clip from the floor, and the Lady Govs went into the half down just seven, 36-29.

The Lady Govs rallied early in the second half, tying it at 44 on the strength of a quick 8-0 run punctuated by a steal-and-fast-break-lay-up from Gray. However, Murray State (8-20, 3-12 OVC) countered with an 8-0 run of their own to retake the lead.

For much of the game’s remainder, it was eerily similar to Austin Peay’s home loss to Murray State on February 7th – the Lady Govs cutting into the Racer lead, the Racers responding to pull back ahead. It seemed like Austin Peay had finally gotten over the hump when Gray hit a three and sophomore Beth Rates [4] knocked down two big free-throws with 50 seconds left to give Austin Peay its first lead since the game’s opening minutes.

The Racers came right back, with Keiona Kirby and Ke’Shunan James earning trips to the free-throw line and knocking down both shots on back-to-back possessions to give the Racers a three-point lead with less than 30 seconds to go. Ice water in her veins, Gray curled off a screen at the top of the key and sank her career-high eighth three-pointer with 15 ticks remaining to tie it up.

But Murray State was not done yet. LeAsia Wright took the inbounds pass the length of the floor for a lay-up and foul, converting the old-fashioned three-point play with 6.8 seconds remaining. Out of a timeout, Austin Peay’s ensuing inbounds pass was intercepted and Wright sank two more free-throws with less than two seconds remaining to ice the game for the Racers.

“There was so much excitement and energy when Tiasha hit that three (to tie the game),” Daniels said. “But credit Murray, they had the sense of urgency to grab the ball out of the net and go the length of the floor. We needed to do a better job of staying engaged in the play there.”

A herculean effort by Gray went for naught as the Clarksville native led all scorers with a game-high 36 points, one off her career-best, and tied the program mark for three-pointers made in a single game with eight, equaling Kara Bergeron’s February 23rd, 2003 mark at Morehead State.

“She’s such a competitor,” Daniels said. “The numbers speak for themselves, but she’d trade it any day to change the outcome.”

But Gray could not do it alone and aside from Nwokocha (13 points, eight rebounds), no other Lady Gov reached double figures. While Gray and Nwokocha combined to go 18-for-35 (51.4 percent) from the floor, the rest of the squad managed just a 6-for-33 (18.2 percent) showing.

James led the way for the Racers with 18 points and 11 boards, while Kirby and Wright chipped in with 14 points apiece.

And so the status is thus for Austin Peay: a win Saturday at Southeast Missouri puts the Lady Govs into the tournament, and Austin Peay already owns one victory against the Redhawks, a 70-62 win, January 31st, at the Dunn Center. Austin Peay also clinches a spot in the field if Eastern Kentucky drops one of its final three contests; the Colonels host Jacksonville State, travel to Belmont, and then return to Richmond to face Tennessee Tech next week.