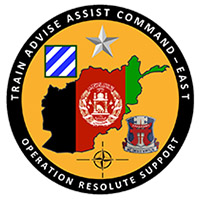 In October, 3rd CR received new orders to join TAAC-E at TB Gamberi and assist with the transition to NATO’s new Resolute Support Mission. Under RSM the Brave Rifles assumed responsibility for training, advising and assisting corps-level units of the Afghan National Security Forces in eastern Afghanistan as well as providing force protection for U.S. coalition troops in the region.

In his speech, Bentley thanked the 3rd CR team for their partnership and bid the Brave Rifles troops farewell. Bentley also highlighted the variety of 3rd CR achievements during a nine-month deployment of continuous transition in Afghanistan.

Bentley then turned to the Rakkasans. “Today we continue what began six months ago in the piney woods of western Louisiana at Fort Polk,” Bentley said. He was referring to the training conducted between the TAAC-E headquarters and 3rd BCT at the Joint Readiness Training Center in July-August 2014, in preparation for this deployment.

In his speech, Vowell thanked Cantlon and the 3rd CR team for a smooth and professional transition. Vowell said this is the seventh deployment for the Rakkasans since 2001, and highlighted 3rd BCT was the first conventional brigade to deploy to Afghanistan. Vowell also had a message of partnership for Afghan National Army leaders that attended the ceremony.

“Our commitment to the people of Afghanistan has always been strong.”

He added that the advisers will continue to partner each day with the ANSF to help them become sustainable for the long term.

For many of the Rakkasans this is not their first deployment.

“Our regiment has many who have sweat, bled and died for us to be here,” Vowell added, emphasizing the importance of the new mission.

At the conclusion of the ceremony 3rd BCT formally assumed responsibility for training, advising and assisting corps-level Afghan army and police forces in eastern Afghanistan under NATO’s RSM, as well as protecting U.S. coalition forces in the region.