That was two weeks ago, and today, Tennessee Army and Air Guard personnel are still at work aiding state and local responders in efforts to recover from a severe winter storm that swept across the state in two waves. 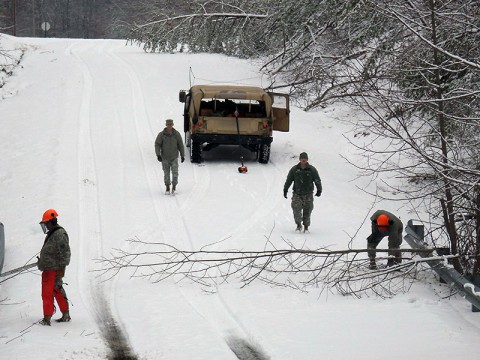 The storm left roadways treacherous, knocked out power to tens of thousands, and ultimately required Tennessee Governor Bill Haslam to elevate Tennessee to a Level II-State of Emergency.

The initial order from the department also directed units to be prepared to perform additional house-to-house welfare checks, provide trucks and crews to assist with debris removal, and man chainsaws to assist in clearing roads should the Tennessee Emergency Management Agency make a request.

“We had crews positioned in Jackson and Paris west of Nashville and Knoxville and Mount Carmel in the east–virtually everywhere in between,” said Lt. Col. Joe Spivey, Military Support Officer.

As winter precipitation moved across the state on Tuesday leaving behind extremely cold temperatures, Military Department officials increased the number of personnel available to 34 as members of the 278th Armored Cavalry Regiment equipped with 17 HMMWV’s stood ready to augment the ongoing missions. In addition, two UH-60 Blackhawk Helicopters from the Army Guard’s1/230th Air Cavalry Squadron, were placed on standby to assist with aerial reconnaissance of the hardest hit areas. 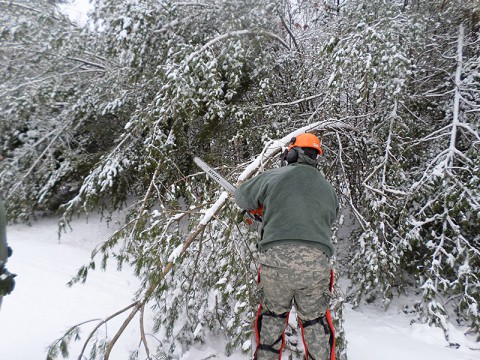 In hindsight Wednesday and Thursday, although extremely cold, would represent a pause in the storm as road conditions improved and the number of residents without power decreased. By Friday, however, the National Weather Service predictions of another system moving through the region were already beginning to materialize resulting in the issuance of a Winter Storm Warning.

On Saturday February 21st, eight personnel from Detachment 1, 777th Maintenance Company were ordered to duty as the Sparta armory was opened to serve as a storm shelter for those without power in White County.

The number of residents at the armory would fluctuate in the coming days finally stabilizing at more than 30 individuals displaced and receiving shelter due to the storm. By mid afternoon on Saturday, Guard officials ordered four additional personnel and two HMMWV’s to again provide wellness checks in White county with another six personnel and three HMMWV’s preparing to deploy.

On Sunday, February 21st, 12 personnel and six HMMWV’s from the 278th ACR were called out to support TEMA ground operations in Cumberland, Fentress, and Putnam counties.

By day’s end the 278th would form two debris clearance teams of 10 personnel each in support of road clearance procedures in Putnam and Overton counties. These teams consisted of three chainsaw operators and seven members to remove debris from roadways.

“I don’t believe I’ve seen damage this extensive as a result of a winter storm, or any storm for that matter, my entire life,” stated Maj. Colby Tippens, a native of Cookeville who also serves as the Operations Officer for the second squadron of the 278th ACR. 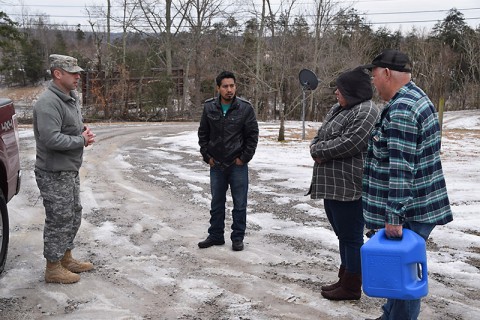 Maj. Colby Tippens delivers a can of kerosene to a family in need in Monterey, Tennessee.

His Soldiers make up the bulk of debris clearance teams operating on the Cumberland Plateau.

“The residents here are so thankful for the support we’ve provided and my crews are highly motivated because they can see the difference they’re making for their fellow citizens during this time of disaster” said Tippens.

Governor Bill Haslam toured the hardest hit areas along the Cumberland Plateau on Tuesday, February 24th, in an Army National Guard Blackhawk landing in Crossville and meeting with County and City Mayors and Emergency Response personnel. Governor Haslam assured them that departments throughout the state were working diligently with local responders to lessen the impact of this severe winter storm.

The Tennessee National Guard again entered the fight on Monday, March 2nd, providing 12 military dump trucks with crews from both the Army and Air Guard to assist in debris removal in Fentress, Putnam, Cumberland and Overton Counties.

“This storm was for real and took all emergency assets available! We are a major tool in the Governor’s toolbox in time of crisis and have assets to combine with other state agencies to mitigate risk to human lives and property damage. The National Guard is a multi-talented agency that can respond to any situation. Over 400 Soldiers and Airmen are to be commended for their efforts in response to this devastating winter storm,” said Maj. Gen. Max Haston, Tennessee’s Adjutant General.

As the Volunteer State braces for another severe winter storm later this week, Tennesseans can rest assured that their Tennessee National Guard is “always ready-always there” when needed.