Jacksonville, FL – After an uncharacteristic second round, Austin Peay State University junior golfer Jessica Cathey [1] opened with a birdie Tuesday and finished the final round of the North Florida Intercollegiate with a birdie. In between she was pretty good as well. 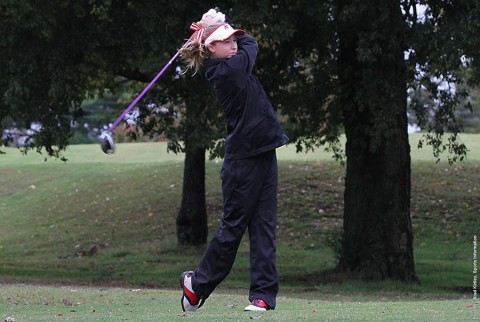 After shooting 87 in Monday’s afternoon round, Cathey bounced back to fire a final-round 2-over 74 that included a trio of birdies to finish at 239, tying her for 57th.

It was Cathey’s second sub-80 score—she was APSU’s only golfer to record 70s during the two-day event at the Jacksonville Golf and Country Club.

Sophomore Morgan Gardner [2] shot APSU’s second lowest round Monday with an 81 while freshman AnnaMichelle Moore [3] at 82. Moore finished at 247 for three rounds while Gardner was one shot back. Sophomore Morgan Kauffman [4] was APSU’s other counter Tuesday, shooting an 87 for a three-round 254. Senior Meghan Mueller [5] struggled to a 92 and 261 total.