Glencoe, AL – With the Ohio Valley Conference tournament being played again on a Robert Trent Jones Trail Course at The Shoals in late April, Austin Peay State University men’s golf team will get a look at another Trail course when it plays in the Grub Mart Intercollegiate, Monday and Tuesday, at the Silver Lakes Golf Course. 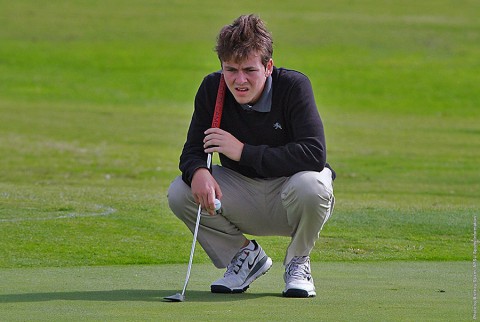 The Govs will be part of an eight-team field that also will feature host Jacksonville State along with a third OVC foe, Eastern Illinois. In addition, Armstrong Atlantic, Western Kentucky, Florida Gulf Coast, Northern Kentucky and Northern Kentucky will be participating. This is will be the first time APSU has played in the event since 2011.

“We can only control only what we can do—and that is what we have talked about this week,” APSU coach Robbie Wilson [1] said. “It is an opportunity. There is certainly not as many teams as the last two events and we will be playing against some teams we believe we can compete with. Jacksonville State has a good program. Their No. 1 player (Tomasz) Anderson is having a fantastic year. We hope we can go toe-to-toe with them this week.”

Silver Lakes is set on rolling terrain with views of the surrounding Appalachian foothills. Much of the course had to be renovated after an April 2011 tornado ravaged the golf course and the surrounding area. It reopened later that fall.

“I think the No. 1 thing I am excited about is seeing how our team plays and performs on a course that is similar to our conference championship course,” Wilson said. “It is a different style course than what we have seen the last two tournaments. It is a little bit more open, the greens are a little bit bigger but more tiers in the green. We will have some challenges we haven’t faced so far. It is also a very scoreable course. However, it is going to give us a good barometer on how we stack up on the conference championship course.”

APSU will feature the same lineup it did in Florida, with juniors Austin Kramer [2] and Chris Baker [3] holding down the top two spots, senior Tucker Wallace [4] playing No. 3 with junior Tyler Phillips [5] at No. 4 and freshman Justin Arens [6] at No. 5. Sophomore Erik Hedberg [7] will participate as an individual—his first competition this spring.

“I think having Austin Kramer [2], Chris Baker [3] and Tucker Wallace [4] at the top of our lineup is important,” Wilson said. “Those guys have played a lot of golf and are the heart and soul and we are going to get on their back and ride them.

“I think there are some opportunities at the back end of our roster for guys to play well and earn some spots going forward.”