Nashville, TN – With all the anticipation surrounding First Tennessee Park, set to open next month, there’s yet another reason to get excited – Nashville-based Strategic Hospitality will be opening a bar and restaurant in the right field concourse area.

In an effort to make First Tennessee Park one of the most unique ballparks in the country, Sounds owner Frank Ward sought out Strategic Hospitality to bring their creative touch to the venue. 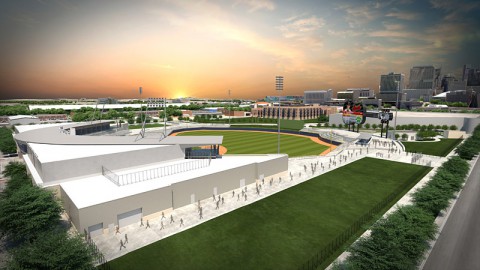 1st Base side view of First Tennessee Park

“I am excited to partner with Strategic Hospitality to develop a fun, dynamic space within the ballpark to give fans an additional place for entertainment during games,” said Ward. “We feel this will be an especially exciting area for the 21 to 35 year old crowd.”

The Band Box will be a 4,000 square-foot outdoor bar and restaurant with entertainment options including ping pong, cornhole, table hockey and shuffleboard – along with the primary backdrop of the Sounds playing on the new field. Televisions will surround the bar area for additional entertainment.

The bar will feature craft beers on tap and an emphasis on local beers, a quality liquor selection, and refreshing frozen drinks such as a grapefruit and vodka slushie or a frozen Jack and Coke.

The Band Box will offer fare for all appetites, including snacks such as vegetables and hummus or jalapeno fritters with derby sauce; or more substantial items such as a kielbasa pork sausage from Porter Road Butcher served with carrot cumin slaw, or the smoked pork nachos, served with jalapeno “queso” sweet corn and tomato pico de gallo, bbq, and cilantro crema. The menu will also offer some vegetarian and healthier options, such as a quinoa chopped salad with vegetables and citrus vinaigrette.

“There is so much positive growth and energy in this city right now and we are honored to be a part of it,” said Max Goldberg, co-owner of Strategic Hospitality. “The Band Box will be a fun, laid-back area within First Tennessee Park where guests can get a really great drink and some food and just hang out and enjoy. We grew up with the Sounds and couldn’t be happier to be a part of the team.”

The Band Box will be open for all home games. Doors will open when the stadium gates open 90 minutes prior to games and stay open until after the game concludes. There will also be an area of ticketed seats with service that will allow fans to order food and drinks from The Band Box. Strategic Hospitality is currently staffing up The Band Box, so if you’re interested in applying, please email [1].