Clarksville, TN – Sophomore outfielder Chandler Groves, of the Austin Peay State University softball team, has been named the Copies in a Flash APSU Athlete of the Week.

Groves hit .556 (10-for-18) in five games last week, smacking three home runs and driving in 12 from her spot as the lead-off hitter for an Austin Peay squad that went 3-2 on the week. 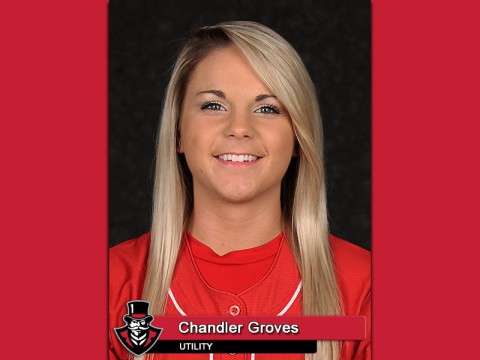 Groves displayed some prodigious power from the leadoff spot, hitting a three-run home run in Game One against Samford and a grand slam in Game Two against the Bulldogs.

Groves also led off the series finale at UT Martin with a solo home run.

For her efforts, Groves was named adidas® Ohio Valley Conference Softball Player of the Week, her first career weekly honor and the first earned by an APSU athlete since Lauren de Castro for the week of March 24th, 2014. Tuesday, she also was named Tennessee Sports Writers Association Player of the Week.