Clarksville, TN – Austin Peay State University men’s basketball has announced the signing of three junior college basketball products, all originally from Indiana, and one high school senior as it completed its 2015-16 recruiting class.

However it is the name of prep senior that will more than interest APSU basketball fans and harken memories of Govs’ days gone by. 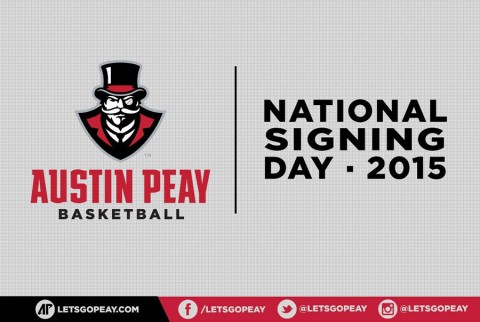 Jared Savage, a 6-5, 186-pound guard/forward from Warren Central and son of former Govs great Jermaine Savage (1992-95), has signed a national letter of intent to follow in the Hall of Fame footsteps of his father.

With the most recent signees the 2015-16 recruiting class will be split down the middle with three junior college transfers and a trio of prep signees—APSU signed two St. Louis natives in Zach Glotta, a second-team St. Louis Metro and Class 5A All-State performer from Fort Zumwalt North, and Stephen Harris, a 6-4 guard from Webster Groves.

“Jared really blossomed during his senior year,” APSU coach Dave Loos said. “He is a good three-point shooter with range. He is getting stronger and is someone with athletic ability. He is developing as a rebounder.

Originally from Indianapolis, the 6-1 point guard drew the attention of multiple OVC schools during the recruiting process but committed to the Govs in early March after a season in which he averaged 11 points and 6.0 assists per game for Wabash Valley. Known more for his ability to distribute the basketball, he did score double figures on 16 occasions, including a pair of 20-point outings. He shot 50.3 percent from the floor and 67.0 percent from the free-throw line. He had nine assists in three contests and eight in another.

On the defensive end he had one contest with five steals and multiple steals in six others. He also had 10 games with five or more rebounds, including a season-high nine against Olney Central.

He earned all-conference and all-region as a sophomore after averaging 9.8 points per game, shooting 47 percent from the floor as a freshman.

He played his prep basketball for former Indiana standout guard Greg Graham at Warren Central in Indianapolis. He was ranked as the 17th best guard in the state as a senior.

“Terrell can push the ball in transition and he gets it to the open man,” Loos said. “He is one of those point guards who makes those around him better. He is a good penetrator off the bounce and can finish.

“He shoots well enough to keep you honest from three. He was a first-team all-conference in a good league.”

During the season, Murry reached double figures in scoring in 28 of 31 games. He scored at least 20 points in 10 games, while achieving his season-high of 30 in the team’s district semifinal win against Sinclair. He scored 20 or more points in 7 of 12 league games.

In his two-year career, Murry averaged 17.6 points, scoring 1,107 points, while averaging 5.1 rebounds and 2.7 assists per game. He displayed a penchant of getting to the free-throw line—he left as the program’s all-time leader in free throws made (274) and free throws attempted (371), a 74 percent free-throw percentage for a team that finished 53-13 over those seasons.

He was a six-time conference player of the week selection in addition to being chosen all-conference and all-region both seasons.

In the summer of 2014, Murry was invited to and participated in the All-American Elite 80 JUCO Showcase in Augusta, Georgia.

Prior to Owens, Murry played three seasons at North Central High School, one of the top programs in Indiana high school basketball. Prior to his senior year, Murry transferred to TAAG Academy in Tampa, FL where he averaged 26 points and four assists per game.

“John has good size at 6-4,” Loos said. “He is a guy who I feel who can play three positions. He put up some really good numbers at Owens and was an All-American selection.

“He really has good handles and is not afraid to attack the basketball—John has great ability to get to the free-throw line. He is a guy who just really plays hard.”

“Kenny has a really good motor and really runs the floor well,” Loos said. “He is a guy who really put up good numbers this year. He is thin but is basketball strong and athletic.

“Kenny can face up or can score with his back to the basket.”