The helicopter, tail number 95-0008, will be on display across the street from the museum, marking a long, storied history for 2-17 CAV.

This Kiowa Warrior began its service in October 1970 as an OH-58A. It would later become an OH-58C. Its last modification was in 1995 when it was fitted with weapons to become a Kiowa Warrior helicopter.

“Aircraft 95-0008 – 008 is how we refer to it affectionately – came into the Army as an OH-58A in 1970,” said Lt. Col. Jack Murphy, the commander of 2-17 CAV. “When I was a platoon leader 19 years ago, we had aircraft like this one, which were alphas in Vietnam that were converted to Charlies and then delta models. Then they were armed to become the Kiowa Warriors. They keep the bones of the aircraft and upgrade the skin and the avionics. This aircraft was converted to a Kiowa Warrior in 1995. The first OH-58D Kiowa Warrior helicopters were assigned to 2-17 CAV in the spring and summer of 1996. This was one of the very first Kiowa Warriors to be assigned to the 101st Airborne Division.” 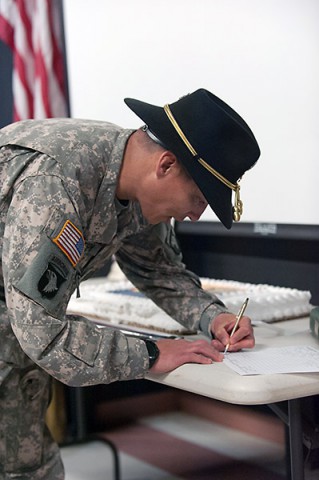 It, like many who flew it, went through multiple deployments and duty stations. As it closed in on nearly 50 years of service, the aircraft remained true to the mission and eventually came home to 2-17 CAV.

“In the nearly 45 years this aircraft has been in service, it’s been assigned on-and-off to 3-17 CAV at Fort Drum and 2-17CAV,” said Murphy.

This helicopter served a tour in Kosovo, three tours in Iraq – leading the original assault up to Mosul during 101st’s 15-month deployment in 2003, and back-to-back rotations in Afghanistan, said Murphy.

The Kiowa Warrior helicopter had humble beginnings and has grown with the changing demands of the Army. Since the program stared in the 1966, the OH-58 platform has served faithfully.

“The Kiowa has a long and proud history,” said Chief Warrant Officer 5 Bud Kenney, the brigade maintenance officer, Headquarters and Headquarters Company, 101st CAB. “It started out as an artillery-spotting platform. The artillery branch actually paid for the mast-mounted sight. They wanted something that could laser designate targets. In the mid-to-late 80s, there was a lot of trouble in the Persian Gulf. The Navy needed a small, armed helicopter to intercept small boats that targeted oil tankers in the Gulf of Hormuz. The Army had the 58D and they decided to arm it. In a 90-day period, the engineers went from concept to operational weapons platform. That’s how the 58D became the Kiowa Warrior.”

With the retirement of this helicopter, nearly 20 years of history will go on display as a permanent part of the division. That service to the Soldiers of the 101st and across the Army will be accessible to all. The removal of the Kiowa Warrior from the Army inventory affects everyone in the squadron. Many feel the loss.

“Even though I never personally worked on [008], it’s still in the squadron, and it has the history behind it,” said Sgt. Joshua Izer, an OH-58D Kiowa Warrior helicopter crew chief for Troop A, 2-17 CAV. “For us, it’s just cool that we’ll have a piece of history in that museum that means something to us. It’s a great honor for us to have that position at the museum.”

The legacy of the Kiowa Warrior that is represented by 008 ripples across the Army. The cavalry is known for their history on horseback. The Kiowa is the latest in a line of mounts that have been retired.

“It is a very bittersweet moment knowing that we will never again use that airframe in a combat situation,” said Izer. “The Kiowa Warrior helicopter holds a special place in our hearts that I don’t think will ever be replaced. You’re not going to see anything special mechanically about it. You know it is special when you go out and talk to an infantry or artillery unit that used our support. When I tell people that I’m a Kiowa mechanic, their eyes light up, and they tell me that we are the reason that they are alive. Soldiers tell me that when the Kiowas are on station that they can do their jobs better because they know everybody is coming home. We make people feel safe, and that’s the most important thing to me.”