Doss, born in San Antonio, Texas, graduated from Boerne High School in 2001 and attended the University of Texas from 2001-03. He will graduate May 8th from APSU with a degree in Criminal Justice and a minor in Military Science. 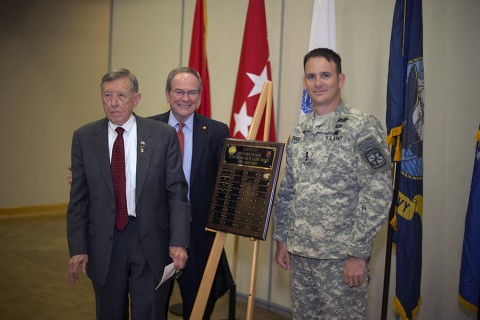 At the conclusion of APSU’s Spring Commencement ceremony, Doss will be commissioned as an officer, along with 17 other APSU Army ROTC cadets.

Doss will be commissioned as an infantry officer and later attend the Basic Officers Leaders Course (BOLC) at Fort Benning, Georgia.

While Doss’ entrance to the U.S. Army as an officer is a career change, military service is nothing new to Doss and his family, having served in the Army since leaving the University of Texas to Join the Army in 2004.

During his service as an enlisted soldier, Doss was awarded the Meritorious Service Medal, Army Commendation Medal with Oak Leaf Cluster, Army Achievement Medal with three Oak Leaf Clusters, among many other awards, honors and recognitions. Doss also served two campaigns in Iraq and one in Afghanistan.

Doss’s award is the fourth consecutive award to be given to ROTC Cadets, following Cadet Daniel Davis in 2014, Cadet Nathan Brewer in 2013 and the first recipient, Cadet Nicholas Shumpis, in 2012.

The award was started by local businessman, Jack B. Turner, in honor of Turner’s long-time friend and business partner, Darol Walker, retired vice president of Jack B. Turner and Associates, Inc. in Clarksville.