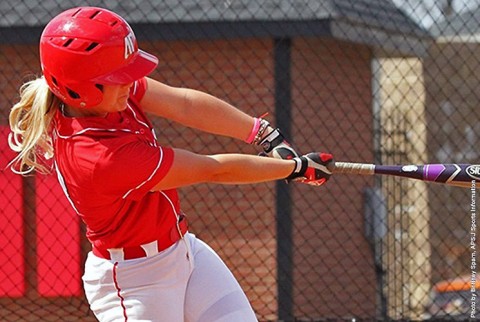 The Lady Govs (9-26, 5-21 OVC) led 5-1 heading into the final inning, having not given up a run since the top of the first inning, but pinch-hitter Jamie Woodworth opened the seventh inning up with a double just inside the bag at first.

Savannah Carpenter would collect the third straight hit for the Redhawks and move to second – and Anderson going to third — when left fielder Chandler Groves [2] misplayed the ball.

APSU starter Allie Blackwood [3] (1-4) would get SEMO’s leading hitter Kyla Fortner to groundout to third for the first out of the inning, but the Redhawks would get its second run of the inning when Morgan Hoeg [4] tried to throw out Anderson at the plate on a ground ball, but the throw was late making the score 5-3.

A walk to Riley Hayes loaded the bases for the Redhawks, followed by Austin Peay picking up the second out of the inning on a come-backer to Blackwood – who forced the lead runner at the plate.

Claire Wernig then had the big hit of the inning, flaring a sinking liner into center field, which Lady Govs center fielder Rikki Arkansas [5] couldn’t come up with — winding up with a bases-clearing double and a 6-5 lead for SEMO.

Austin Peay would get the potential tying run on base with a lead-off single by Vinchenza DiBenedetto [6], but couldn’t get her any further than second base.

Keaira Schilling (5-10) got the win, while Madeline Krumrey pitched the bottom of the seventh inning to pick up her second save of the year.

Southeast Missouri had opened up the game by picking up an unearned run in the top of the first inning, with Austin Peay tying the game in the bottom of the second inning, on an RBI single by Ashley Eisenbraun [7].

Austin Peay would take its first lead of the day in the third inning, with two runs coming in on an error by SEMO on a ground ball by DiBenedetto and an infield RBI single by Blackwood, making it 4-1.

Eisenbraun and Blackwood finished with two hits each to lead the Lady Govs.

The Lady Govs final run of the game would come in the bottom of the fifth inning, on an RBI single by Mel Pavel [8].

In Game 1, Austin Peay would take an early 1-0 lead in the first inning, with Groves scoring on an error off a ground ball by DiBenedetto.

But that would be the only run of the opening game for Austin Peay, with SEMO scoring two runs in the second, fourth and sixth innings, and single runs in the fifth and seventh innings.

The two teams conclude the three-game OVC series noon, Sunday, which will also be Senior Day for the Lady Govs – who will be honoring seniors Laurel Burroughs [10] and Eisenbraun prior to the game.