Clarksville, TN – Charles “Bubba” Wells, Austin Peay State University basketball’s all-time leading men’s scorer who has served the program as assistant coach for the past 10 seasons, has resigned his position to pursue other coaching opportunities. 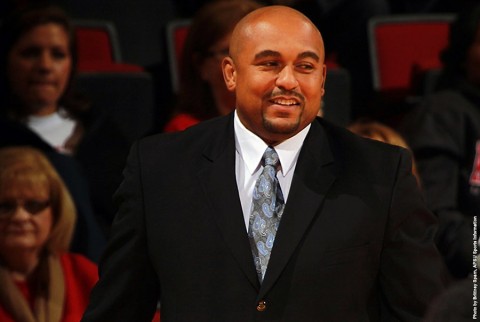 “Bubba Wells and I have shared lots of basketball and lots of life over a 14-year period,” Loos said. “I watched him grow and prosper as both as a player and coach. I greatly value the relationship we have had over all the years and I will miss the daily interaction.

“He leaves a tremendous legacy and I thank him for his many contributions to our University, this community and, of course, our basketball program. I wish him the very best as he continues his career.”

Wells returned to Austin Peay in June 2005 as assistant coach, working with Govs post players, after an eight-year professional career that included two NBA seasons after he was chosen by the Dallas Mavericks in the 1997 draft’s second round. A torn Achilles tendon and other assorted leg injuries curtailed his pro career.

Wells’ APSU career also was interrupted by leg issues but he still finished with 2,267 points—the first APSU player to reach 2,000 points—ranking him third all-time in the OVC. He was a three-time first-team All-OVC choice after being named the league’s “Freshman of the Year” in 1993-94.

As a sophomore, Wells averaged 19.3 ppg and followed that up with a 26.3 ppg (third in nation) in 1995-96, earning the OVC Tourney MVP in leading the Govs to a crown and NCAA tourney appearance. Wells still owns several OVC tourney marks.

But it was his senior year that drew nationwide attention. He missed the season’s first 12 games with a stress fracture in his left tibia, requiring surgery to place a tibial nail (current redshirt freshman Chris Porter-Bunton [2] had similar surgery earlier this winter) in the lower leg. He underwent similar surgery following the 1994-95 season, needing five months to rehabilitate.

However, this time the rehab process took less than five weeks and in his debut game, he scored 39 points in 28 minutes. As a result, the performance and the surgery were featured in “USA Today.” He went on to become the nation’s unofficial scoring leader (he did not have enough games played to qualify for the official title), averaging 31.7 ppg, scoring 30 or more points 11 times including three 40-point games.

He also caught the attention of “The Los Angeles Times” in a front-page story about “The Man of Steel” and segments on both CBS NCAA College Basketball “at the Half” and NBC’s “Today” show—the “Real Rod Man”.

He was named InfoSport: Basketball’s 1996-97 National Comeback Player of the Year. Prior to the season, he was featured in The Sporting News, Sports Illustrated and the Dick Vitale College Basketball Yearbook.

Loos immediately will begin a search for Wells’ replacement on the APSU staff.