May is American Stroke Month

Nashville, TN – This month, the American Heart Association is bringing attention to stroke in a creative, colorful way.

Strokes for Stroke is a unique local art show featuring original pieces created by –  and for – those affected by stroke. Many of the pieces to be displayed were created by stroke survivors, while other pieces have been created and donated by artists in honor of someone they know who’s had a stroke. 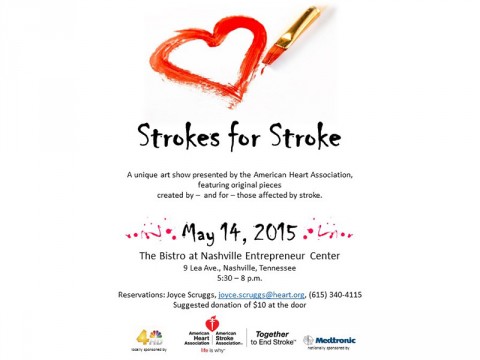 The Strokes for Stroke art show will honor those affected by stroke, celebrating what they can do and the many ways they express themselves through art, while bringing attention to the 795,000 Americans who suffer a stroke each year and the long lasting battle for recovery many face.

More than twenty artists will be represented among the forty-plus pieces on display at the show.

Stroke is the No. 5 killer in the U.S., and is a leading cause of severe, long term disability. Stroke can affect motor skills, coordination, speech and comprehension.

Among the stroke survivor artists whose work will be shown:

Every 40 seconds, someone in America has a stroke. On average, every four minutes, someone dies from stroke.

Among the other artists who are donating in honor of others are well-known Nashville artists John Cannon and Kellie Montana, a group of pediatric patients at Monroe Carell Jr. Children’s Hospital at Vanderbilt and residents at the Hearth at Franklin, with several stroke survivors among them.

The public is invited to visit the show. Ticket cost is free, with a suggested donation of $10.00 at the door. All proceeds will go to the American Heart Association.

There will be live entertainment by Pretty Ravens.

The American Heart Association’s Together to End Stroke is nationally sponsored by Medtronic. Local media sponsor is WSMV Channel 4.

Learn more about stroke at www.strokeassociation.org