Dallas, TX – Austin Peay State University infielder Logan Gray was named one of 35 semifinalists for the Dick Howser Award, Friday, presented by Easton Foundations and selected by the National Collegiate Baseball Writers Association. The award, given to the top player in collegiate baseball, is based on two rounds of national voting. 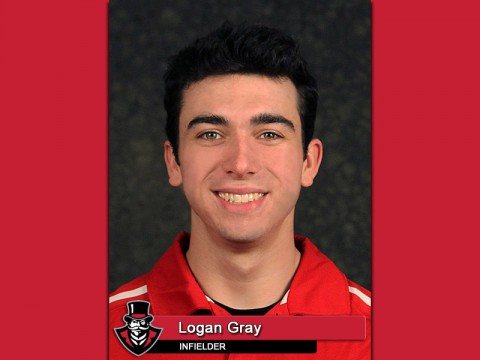 Gray, of Leawood, Kansas, was putting together one of the finest power displays in program history prior to his April 24 injury. He amassed 14 home runs in a 22-game span prior to the injury, which occurred in his 38th game this season.

Gray leads the Govs with a .366 overall batting average and owns a team best .353 batting average in OVC play. He hit 10 home runs in 21 OVC contests, finishing with a .788 slugging percentage in league play. Gray had three game-winning hits and three game-securing hits during the season.

This is the 29th year of the Dick Howser Trophy, presented by Easton Foundations. The finalists will be announced on Wednesday, June 10th.  The 2015 award will be presented at TD Ameritrade Stadium in downtown Omaha, the home of the College World Series for the fifth year.  The winner will be unveiled on MLBNetwork on Friday, June 12th and then a press conference with the winner will be held on Saturday, June 13th at 10:00am (CDT), the opening day of the 2015 CWS.