Pasadena, CA – NASA’s Dawn mission captured a sequence of images, taken for navigation purposes, of dwarf planet Ceres on May 16th, 2015. The image showcases the group of the brightest spots on Ceres, which continue to mystify scientists. It was taken from a distance of 4,500 miles (7,200 kilometers) and has a resolution of 2,250 feet (700 meters) per pixel.

“Dawn scientists can now conclude that the intense brightness of these spots is due to the reflection of sunlight by highly reflective material on the surface, possibly ice,” Christopher Russell, principal investigator for the Dawn mission from the University of California, Los Angeles, said recently.

Dawn arrived at Ceres on March 6th, marking the first time a spacecraft has orbited a dwarf planet. Previously, the spacecraft explored giant asteroid Vesta for 14 months from 2011 to 2012. Dawn has the distinction of being the only spacecraft to orbit two extraterrestrial targets.

The spacecraft has been using its ion propulsion system to maneuver to its second mapping orbit at Ceres, which it will reach on June 6th.

The spacecraft will remain at a distance of 2,700 miles (4,400 kilometers) from the dwarf planet until June 30th. Afterward, it will make its way to lower orbits. 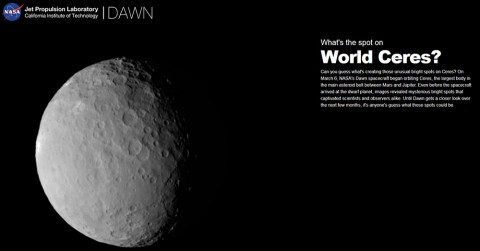 The German Aerospace Center, the Max Planck Institute for Solar System Research, the Italian Space Agency and the Italian National Astrophysical Institute are international partners on the mission team.

For more information about the Dawn mission, visit: