[1]Clarksville, TN – On Sunday, May 25th, the Vietnam Veterans of America Chapter 396 held their annual Candlelight Vigil to remember the men and women who were left behind in Vietnam when American forces withdrew in 1975.

It is a solemn occasion when a nation gathers together to honor its soldiers, those who lived to come home, but even more importantly those who did not. 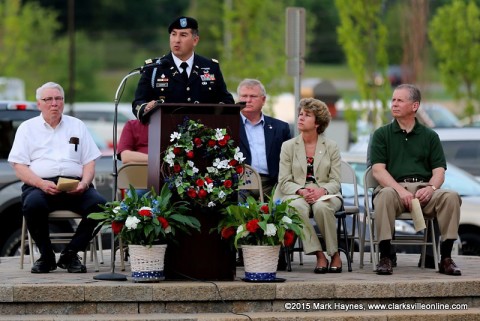 “We hold this event to remember the POW/MIA’s from the state of Tennessee and all the remaining POW/MIA’s from across the country,” stated Vietnam Veterans of America Chapter 396 Treasurer, Gery Ezell.

The local vigil was started in 1989, the same year Chapter 396 was chartered. It is the honored duty of this chapter to call the roll so those brothers and sisters will not be forgotten. It started with 43 names on the roster. Since then, 16 of our comrades have been returned or are accounted for. The latest was SSG Lawerence Woods in 2014.

There are still 27 missing POW/MIA’s from the State of Tennessee. Each one was honored in a ceremony held in front of the William O. Beach Civic Hall at Veterans Plaza in Clarksville Tennessee on Sunday evening. 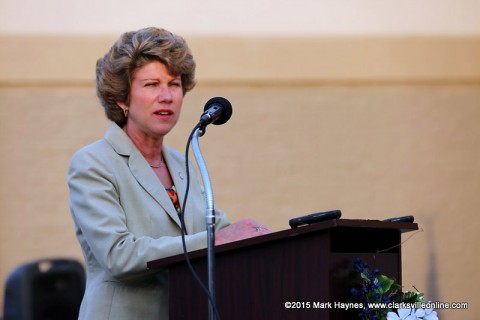 Clarksville Mayor Kim McMillan speaking to those in attendance.

The colors were posted by the honor guard of Montgomery Central High School JROTC. Then a single chair representing all of the POW/MIA’s nationwide was placed in a position of honor before the audience. The Pledge of Allegiance was recited, and a moment of silence was held. Then Rev. Scott Witt delivered the invocation. 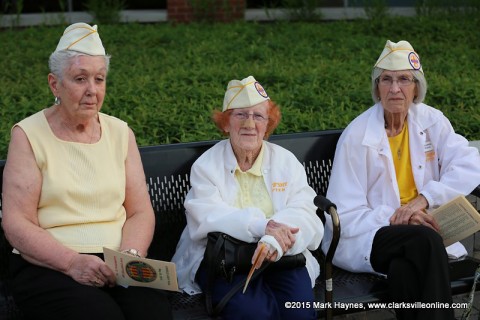 Clarksville Mayor Kim McMillan addressed a crowd of around 100 people, “It’s is humbling to be here tonight. To stand in the presence of all of you and those who are not with us because they have given so much for us to be here enjoying this beautiful on this solemn occasion.”

“I just want to say on the behalf of the City of Clarksville and everyone of it’s residence, we are thankful for the service that has been given by all of those. We are thankful for those who stood behind those such as the Gold Star Wives that are here with us tonight,” said McMillan. “We will never forget the sacrifice of those who have come before us.”

LTC (Retired) Jose Garcia stated, “I am truly honored to be here to recognize those who have sacrificed so greatly in service to our nation. We must never forget the men and women that gave the ultimate sacrifice or those who were never returned properly. We will not forget. Their memories are forever imprinted on the minds of the families and friends that were left behind.”

“Tomorrow, after the sun sets, and after the smell of hotdogs and burgers loft away, I ask you to stop and reflect on the service members who payed a price that we will never be able to match,” said Garcia. 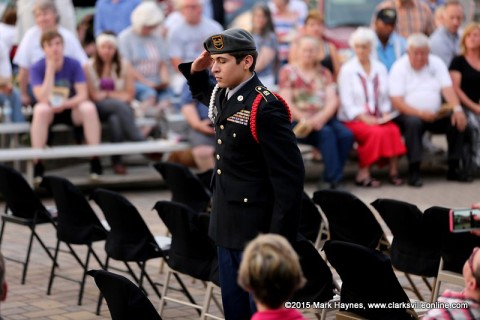 During the ceremony, the 27 names were slowly read aloud, the bell pealed, as someone in the background intoned “Absent, but not forgotten.” The flame was lit. The empty chair, draped with a POW/MIA shirt and a placard, identifying the missing solider that it represented, was carried forward by a Montgomery Central JROTC, cadet who once it was in place stepped up before it, and rendered a silent salute.

The chair for U.S. Army Staff Sergeant Lawerence Woods was retired. His remains were identified September of 2013. His body was laid to rest in Arlington National Cemetery on March 21st, 2014.

The POW/MIA chair was retired followed by the colors. Then Rev. Scott Witt delivered the benediction closing out the ceremony. 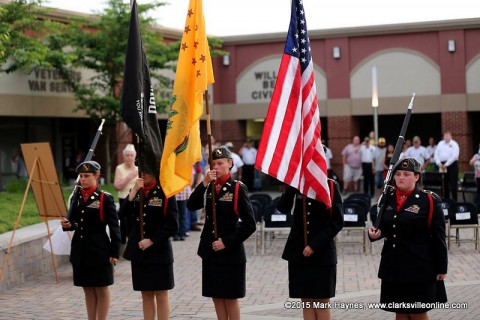 “It’s a solemn occasion because were looking at empty chairs. I look forward to a day when there will be no chairs and then we can just come together and celebrate the lives of those that have been recovered,” said Tennessee State Representative Joe Pitts.

“It’s always a somber event for people like me to be able to recognize those who have given the ultimate sacrifice and given their all for us to be able to be here tonight,” stated McMillan. “We are so thankful and it’s a debt we can never repay.”

Remembering these missing soldiers is indeed a solemn duty, and one that patriotic Clarksvillians are only too happy to undertake.

Below are the names of the missing Tennesseans. We offer our fervent hope that they too all find their way home once more.