Clarksville, TN – The annual Governors Golf Classic has a new partner and name for 2015.

In fact, APSU Athletics and the Clarksville Chamber of Commerce have joined forces to combine their two golf tournaments into the Governors and Chamber Community Golf Classic and Partner Celebration dinner, June 26th. 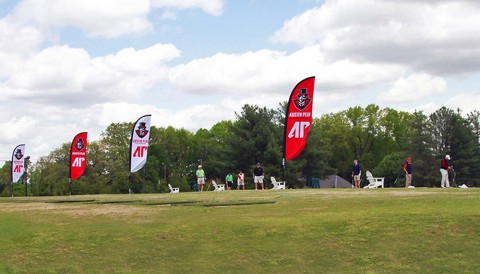 Jersey Mike’s will serve box lunches to the competitors while Dairy Queen again will provide ice cream treats to golfers at all four golf locations while Dominos will be distributing various food items as well at the respective courses.

Like last year, the 5:00pm-7:00pm strolling dinner, hosted by the Clarksville Country Club, will be open to all golfers (included in golf registration), community and corporate partners.

A silent auction will originate at www.LetsGoPeay.com [1] and conclude at the dinner while a live auction also will begin at 7:00pm. The night will conclude with The Terry Green Band providing musical entertainment.

APSU originated its Governors Golf Classic tournament in 1987. Last year, however, was the first where the event was played over two courses—34 teams played at Swan Lake and 36 at the Country Club.

At the country club, the men’s team of Haskell Fink-Joel Mangrum-Brian Alexander-Curtis Copeland finished first with a 47 (25 under).

On the women’s side, the team of Angela West-Vickie Stanfill-Cindy Dahlgren-Martha Choat with a 54 won the event.