Tampa, FL – Gas prices could finally be reaching their peak as the rate of increase at the pump is beginning to stall. Since last Sunday, the average price for gasoline rose 5 cents in Georgia and 1-cent in Tennessee, but declined 1-cent in Florida.

“Gas prices usually peak by May, but have been rising on the back of crude oil prices and increasing demand,” said Mark Jenkins, spokesman, AAA – The Auto Club Group. “The price of crude oil has found a new normal around $60.00 a barrel, and it’s likely that gas prices will decline in June. This would be the first time that gas prices peaked after the month of May since 2010.” 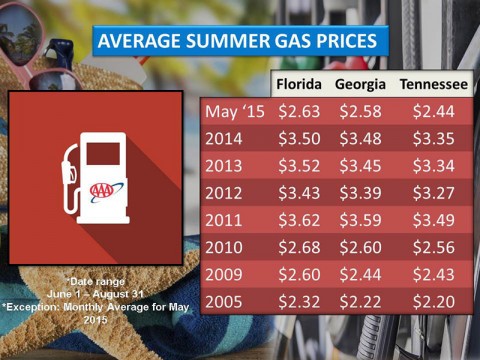 Summer Gas to Average $2.45
Motorists could actually find the cheapest summer gasoline in a decade. The U.S. Energy Information Administration projects that summer gas prices will average $2.45, the lowest since 2005.

However, unforeseen refinery outages or other disruptions to supply have the potential to increase regional product prices beyond forecast levels in the short term. 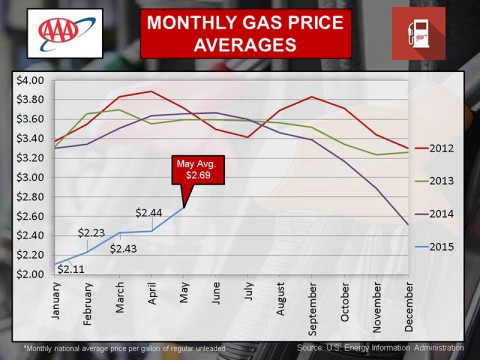 The monthly price for gasoline rose for the fourth consecutive month. Gas prices averaged $2.69 in May, 25 cents more than the April average, and the highest monthly average since November 2014. 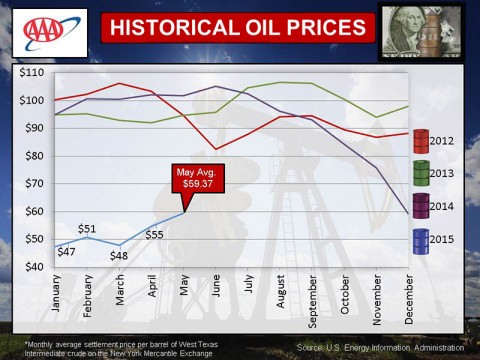 he average price of oil increased for the second month in a row. WTI averaged $59.37 a barrel in May – $4.74 higher than the average in April, and the highest monthly average since November 2014.

Since the beginning of April, the weekly average price rose six consecutive weeks, but declined during the past two. Oil settled at $60.30 a barrel Friday after trading as low as $56.51 last week. The highest daily settlement this year was $60.93 a barrel on May 6th.

“Oil prices jumped a few bucks at the end of last week after a report showed increased demand and a decline in U.S. oil inventories and the number of active drilling rigs,” Jenkins continued. “Analysts remain split over the future of oil prices, which should remain volatile during the summer months.”

AAA updates fuel price averages daily at www.fuelgaugereport.aaa.com . Every day up to 120,000 stations are surveyed based on credit card swipes and direct feeds in cooperation with the Oil Price Information Service (OPIS) and Wright Express for unmatched statistical reliability. All average retail prices in this report are for a gallon of regular, unleaded gasoline.