HomeNewsAAA reports Gas Prices Forecast to Average $2.47 through the end of...
News

AAA reports Gas Prices Forecast to Average $2.47 through the end of 2015

Tampa, FL – Motorists across the country saw increases at the pump last week, but that trend is not likely to continue. The EIA updated its forecast, expecting monthly average gas prices to decline through the end of the year, reaching as low as $2.27 in December. 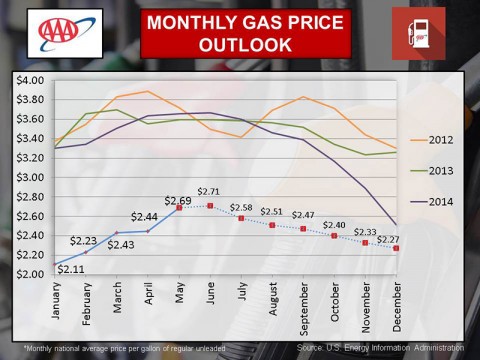 “Gas prices should already be falling, but are still adjusting to minor bumps in the oil market,” said Mark Jenkins, spokesman, AAA – The Auto Club Group. “There is plenty of oil to go around, but speculators are latching on to any hope for a recovery in prices. Despite the volatility, motorists are still enjoying the cheapest summer gas prices in five years, saving nearly $15.00 for a full tank of gas.”

Oil prices reached their highest level of the year last week, before settling below $60.00 on Friday. The price for a barrel of oil averaged $60.09 last week – an increase of 44 cents from the week before. Prices settled as high as $61.44 in the middle of the week on news of slowing domestic oil production and reports of increased demand.

The global oil market remains characterized by abundant supply and key producers are not showing signs of curbing output. U.S. production rates remain elevated despite recent signals of a slowdown in production due to reduced rig counts, and Saudi Arabia, the world’s leading crude exporter, is reportedly preparing to increase its output to record levels.

Despite projections of rising demand, both factors have the potential to increase the global supply glut, likely keeping downward pressure on global crude prices.

AAA updates fuel price averages daily at www.fuelgaugereport.aaa.com . Every day up to 120,000 stations are surveyed based on credit card swipes and direct feeds in cooperation with the Oil Price Information Service (OPIS) and Wright Express for unmatched statistical reliability. All average retail prices in this report are for a gallon of regular, unleaded gasoline.