Clarksville, TN – Author Sue Freeman Culverhouse was the featured speaker as she described the life of Robert Penn Warren at the June 15th meeting of the Montgomery County Historical Society. President Joe Filippo greeted the members and had the treasurer announce the upcoming barbeque fund-raiser to be held at the end of July.

Billyfrank Morrison gave a history of the school built on the site of the community center in South Guthrie, TN, where the event was held. 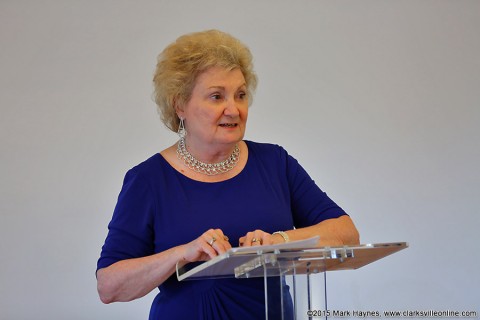 It is quoted here:

Julius Rosenwald (1862–1932) was a German Jewish immigrant’s son; he became an investor, CEO, the president and life-time Chairman of Board for Sears. He was the Founder of the Rosenwald Fund, which contributed seed money for projects for black and Jewish needs. The money from fund often was bantam and had to be matched locally.

Beginning in 1912 the fund built 4,977 schools, 217 teachers’ homes, and 163 shop buildings in 15 states, including Tennessee and Kentucky. Across Tennessee, at least 375 schools were built.

It funded the lesser known Chicago’s Wabash YMCA in 1914 followed by many Y’s across the United States and the Michigan Boulevard Gardens Apartments ( also known as the Rosenwald Apartments, a housing project for blacks. 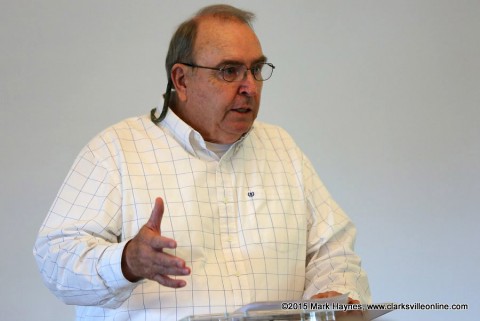 Today, only about 10 percent of buildings constructed remain standing, and many are in serious disrepair.

In 1922, this building was constructed as the two room Rosenwald schoolhouse named Warfield School (named for Edd Warfield). The school closed in 1968.

It also served as a community center.

There were seven other Rosenwald schools built in Montgomery County.

This building received a facelift in 2012 with a major renovation to bring the building back to its original glory. The addition that was placed on the back of the building in the mid 1970s was removed, and a bank of windows that was removed in a previous renovation was brought back. The meeting room in which the historical society is meeting for the June gathering was added at a “L” to the main building and a patio was placed at the rear of the main section of the community center.

Some of the people who headed the renovation efforts were Carolyn Bowers, Jerry Albert, and Stacy Goodwin.

Jim Marshall, a member of the historical society, asked where the funding for the current renovation was obtained. Billyfrank Morrison replied that it was from Montgomery County since South Guthrie is located in that region.

James Moore, director of the R. F. Sink Library at Fort Campbell, introduced Mrs. Culverhouse and gave an overview of some of the accomplishments of Robert Penn Warren.

Culverhouse is author of Tennessee Literary Luminaries: from Cormac McCarthy to Robert Penn Warren, Seven Keys to a Successful Life, and To Cure Sometimes, To Comfort Always. 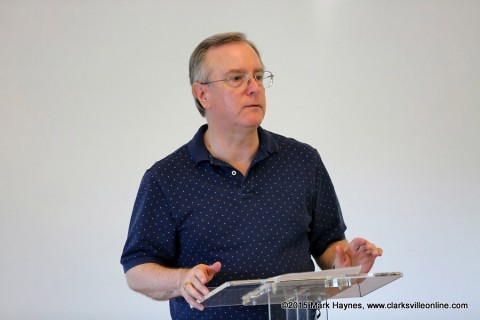 Following is an abbreviated report of the speaker’s remarks.

Robert Penn Warren was born on April 24th, 1905 and lived until her was 84. His remarkable life resulted in his being the only person to every win three Pulitzer Prizes. His first was in 1947 for All the King’s Men, a novel in which the main character Willie Stark closely resembles Huey Long, the governor of Louisiana; Warren, however, was fond of saying that the novel was actually about Julius Caesar. His second and third Pulitzers were for books of poetry, Promises: Poems 1954-1956, in 1957; and Now and Then: Poems 1976-1978, in 1978. He is also the only person to win for both fiction and poetry.

Some of his accomplishments include a Rhodes scholarship to Oxford, winning a Guggenheim Fellowship for study in Italy during the rule of Mussolini, serving as Consultant in Poetry to the Library of Congress in 1944-45 (this was later termed Poet Laureate), delivering the Jefferson Lecture for the National Endowment for the Humanities in 1974, the Bollingen Prize, National Medal for Literature, the Presidential Medal of Freedom, MacArthur Prize Fellowship, the National Medal of Arts, and with Cleanth Brooks serving as co-editor of The Southern Review. With Brooks, he also wrote Understanding Poetry,Understanding Fiction, and Fundamentals of Good Writing – A Handbook of Modern Rhetoric. Joining them was R. W. B. Lewis for American Literature: The Makers and the Making. These books literally changed the way American literature was studied.

His novels are Night Rider, At Heaven’s Gate, All the King’s Men, World Enough and Time, Band of Angels,The Cave,Wilderness: A Tale of the Civil War, Flood: A Romance of Our Time, Meet Me in the Green Glen, and A Place to Come To. Also important among his other works is what is termed an essay, Portrait of A Father.

This is but a small sample of what was accomplished in his 84 years. What is fascinating to me is the life of the man himself. Here was a boy born into an ordinary family in a small town who went on to be one of the greatest writers who ever lived. Who was he and what influences led him to produce these insights into the human condition?

Robert Penn Warren was the oldest of three children of businessman Robert Franklin Warren and schoolteacher Anna Ruth Penn Warren. His sister, Mary, and his brother, Thomas, and he grew up with every advantage educationally that his parents could provide. Robert Penn was also influenced by his grandfather, Gabriel Thomas Penn, a great storyteller who had served as a captain under General Nathan Bedford Forrest during the Civil War (“or The Recent Unpleasantness” as it is called hereabouts.)

Robert Penn Warren went to school in Guthrie until he was 15 and then, because he was deemed too young to go to college, he was sent to Clarksville High School for his senior year. He rode the train back and forth home on the weekends and stayed with family friends in Clarksville during the week. At the time five railroads brought 22 trains a day through Guthrie.

While he was at Clarksville High, Warren published three articles in the Purple and Gold, the school’s literary magazine–”Munk,” “The Dream of the Driller,” and “Senior Creed.” Copies of these small books are in the archives of the Felix G. Woodward Library at APSU as are Robert Penn’s report card, a portrait of him, and the senior class picture. These are due to Patricia Winn’s locating them and giving them to the library (along with her husband, Howard.)

Robert Penn Warren had encountered a visitor to his parents one summer prior to this. The young man arrived on the train in dress whites from the U.S. Naval Academy—and Robert Penn then decided that he would also attend college there to become an engineer. Although his father wanted him to be a lawyer, he arranged through Congressman R. Y. Thomas from Muhlenberg County for Robert Penn to be appointed to Annapolis.

The summer after high school Robert Penn was lying on the grass beside his parents home one night looking at the stars as he liked to do. His brother Thomas, for some unknown reason, was tossing a clump of coal in the air across the hedge. Tragically, the coal landed in Robert Penn’s left eye and as a result, he lost the sight in his eye—and his chance to go to the Naval Academy.

Here is what happens to a person who becomes blind in one eye. One’s brain has to rewire. He loses stereoscopic binocular vision and depth perception. One’s peripheral field of vision is reduced and hand-eye coordination becomes lessened. The person may become clumsy, may bump into objects easily, and may have great difficulty in going up and down steps. The person is seven times more likely to have a car accident and should not drive at night. Ultimately, the loss of an eye causes significant, serious emotional trauma and loss or damage to self image.

As he was adjusting to this life-changing event at age 16, Robert Penn Warren proceeded to Vanderbilt that fall. He described himself as “maimed” and ‘”disqualified for life.” In his poem, “Red-Tailed Hawk and Pyre of Youth” written in 1977 (when Warren was 72 years old), he refers to his own blindness thus:

I knew how it felt with one gone.

Although Warren had every intention of becoming a chemical engineer when he entered Vanderbilt, he took a class in composition under John Crowe Ransom, the first poet he had ever met. His days at Vanderbilt led to his becoming a part of The Fugitives, a group of poets who met outside the college on their own and eventually produced the literary magazine The Fugitive—and all thoughts of engineering fell by the wayside.

These writers led to the “Southern Renaissance.”

By the way, Warren had a suicide attempt during his third year at Vanderbilt. He put a chloroform cloth over his face but was fortunately found by a friend, Charlie Moss, in time. He left letters but most were destroyed. One stated that he felt he could never make it as a poet. Many years later he wrote to Allen Tate that his suicide attempt was the result of fear of blindness.

Warren returned to Vanderbilt after he had recovered at home in Guthrie. During that time he introduced Allen Tate to Carolyn (later changed to Caroline) Gordon who were married twice eventually. 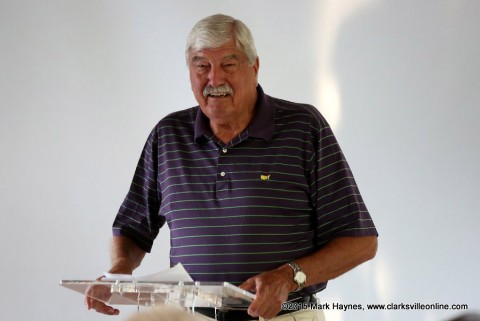 Joseph Blotner, Warren’s biographer (and also the biographer of William Faulkner), discusses in depth Warren’s marriage to Emma “Cinina” Brescia, whom he met at Berkeley. An aesthetically gifted person–“the cleverest female I have ever known,” Warren wrote to Tate–she resembled the wives of Scott Fitzgerald and T. S. Eliot in her mental instability and her deepening resentment of her husband’s success as a writer. …….

Divorced from Brescia in 1951, Warren had a passionate affair with an unnamed married woman and then tried to elope with an old flame, who instead chose to stay with her husband.

But destiny had another woman in mind, the talented writer Eleanor Clark. Clark had been married briefly to a Czech refugee with whom she shared hand-to-mouth poverty and a sojourn at Trotsky’s compound in Mexico in 1937. The Clark-Warren marriage, in December 1952, bore out the old Sinatra song that love is better the second time around. His happiness magnified by the birth of two children, Rosanna and Gabriel, Warren welcomed them with Promises, his Pulitzer-Prize winning volume of poems of 1957.

His new family, in turn, seemed to unblock copious memories of his early years, so that a great deal of his prodigious late creativity focused on opposite ends of his time spectrum. Novels like Flood, A Place to Come To, and The Cave reflect this impulse, but it shows up most compellingly in book after book of poems: Tale of Time, Incarnations, Or Else, Now and Then, Being Here, Rumor Verified, and Altitudes and Extensions.

Warren’s teaching career took him to Vanderbilt University, Southwestern College in Memphis, the University of Minnesota, Yale University, and Louisiana State University. He ended his life due to bone cancer at his summer home in Vermont, but a memorial marker was placed at his request in the family cemetery in Guthrie.

I have barely touched on the life of Robert Penn Warren. As you can see, his life was one of challenges, accomplishments and rewards. I hope that you will read some of his marvelous works for yourself and reflect on how Guthrie, Kentucky and Clarksville, Tennessee gave the early foundation for one among many.

About the Montgomery County Historical Society

The Montgomery County Historical Society was formed in 1924.  Our charter is to promote interest in and the enjoyment of the history of Montgomery County, Tennessee, and adjacent areas; to ascertain, perserve and promote local history; to identify and preserve local historic sites, structures, artifacts and other materials and promote their preservation; to hold periodic meetings in keeping with the interest of the society.