The ceremony began with a traditional inspection of the troops by the outgoing commander in preparation for passing of the battalion’s colors.

After the inspection, Command Sgt. Maj. John Vicars, the keeper of the unit colors and the battalion’s most senior enlisted noncommissioned officer, passed the colors to Shaffer who then passed them to Col. 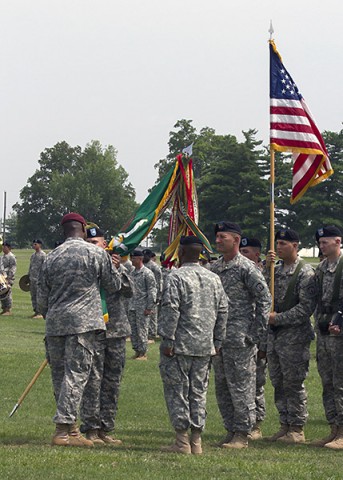 Williams led the battalion – the most decorated military police battalion in the Army – for nearly two years. He took command on June 28, 2013, and throughout those two years, the battalion worked to reduce crime on Fort Campbell; increased Air Assault qualified Soldiers in order to better support the installations mission; built relationships with both local law enforcement and Army National Guard units; deployed a company to Liberia, Africa, in support of the Ebola Virus Disease response; conducted a Joint Readiness Training rotation at Fort Polk, LA; and was recognized for having the best traffic section by The International Association of Chiefs of Police.

“The 716th Military Police Battalion represents the best of the best,” said Conyers. “The 101st Airborne Division (Air Assault) and the 18th Airborne Corps were outfitted with superbly trained, mentally and physically fit Soldiers ready for both combat and law enforcement missions in a very challenging and complex environment.”

The Peacekeepers are charged with balancing the intricacies of maintaining law enforcement for the Fort Campbell community and being combat ready if they are needed to deploy in support of the nation.

During William’s final remarks to his formation, he thanked the formation of Soldiers who stood on the parade field for their efforts and dedication.

“Today is about transition and tradition, but primarily to say thank you to the numerous folks who have supported the Peacekeepers, the DES (Directorate of Emergency Services) and the Williams’ Family,” he said.

As Williams signed off with the traditional saying, “Peacekeeper six, out,” Johnston was welcomed in as the new commander of the Peacekeepers.

Conyers welcomed Johnston and reminded him that “there is no greater responsibility in our Army than to command.”

The ceremony concluded with a pass and review of the formation, as a symbol of the units precision and skills.