HomeNewsAmerican Heart Association report shows nearly half of Hispanics unaware they have...
News

American Heart Association report shows nearly half of Hispanics unaware they have High Cholesterol; less than a third treated

Dallas, TX – Nearly half of Hispanic adults were unaware they have high cholesterol, and less than a third receive any kind of cholesterol treatment, in a new study in Journal of the American Heart Association.

Hispanics are one of the fastest growing ethnic groups in America, with 52 million among the U.S. population, yet their awareness and management of high cholesterol lags behind other ethnic groups. 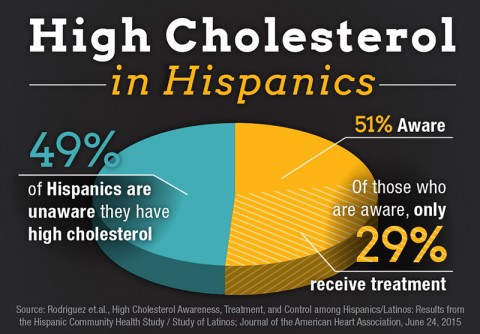 Educating Hispanics/Latinos about the importance of maintaining healthy cholesterol levels could have a significant public health impact on reducing the burden of heart disease in America.

Researchers reviewed data from 16,415 Hispanics, between 18 to 75 years of age, who participated in the Hispanic Community Health Study/Study of Latinos.

“Many Hispanics have high cholesterol, approximately 45 percent, probably due to a mix of genes and diet,” said Carlos J. Rodriguez, M.D., M.P.H., study lead author and an associate professor of medicine and epidemiology at Wake Forest School of Medicine in Winston Salem, North Carolina.

> About half of Hispanics were not aware that they had high cholesterol in a multi-site study.

> Of those who were aware, less than a third were treated.

> Younger adults, women, the uninsured, those with lower income, and more recent immigrants were less likely to have their high cholesterol controlled.

“What’s more surprising is the lack of awareness, treatment and control. That needs to change since awareness is the first step in prevention,” he said.

In this study, treatment was effective in 64 percent of those treated, indicating that awareness and management can work in lowering cholesterol levels.

“Lack of awareness is a problem with roots at different levels in Hispanics: access to care and patient/provider difficulties such as language barriers or cultural insensitivity may further contribute to these gaps,” Carlos said.

“Heart disease remains an equal opportunity threat to the health of everyone; no person is immune. If we are to continue our record of success in reducing the burden of heart disease, we will need to broaden our target for risk factor reduction,” said American Heart Association spokesperson Clyde W. Yancy, M.D., chief of cardiology at Northwestern University’s Feinberg School of Medicine and a former AHA president.

“We cannot rest on our triumphs as nearly 50 percent of those Latino Americans with high cholesterol are unaware of the presence of this risk factor for heart disease and thus remain exposed to an increased risk for heart attack and stroke. We should consider this as an unacceptable burden of risk and consider public health policies, community awareness and a redoubled focus on prevention in all communities at risk.”