Tampa, FL – AAA forecast the most auto travelers for the Independence Day holiday on record, and motorists in Florida and Tennessee found the cheapest gas prices for the holiday since 2009, while gasoline in Georgia was the lowest since 2010.

“Low gas prices were a major driver in the rise in auto travelers this year,” said Mark Jenkins, spokesman, AAA – The Auto Club Group. “However, Americans have grown cautious about rising gas prices during recent months and worry they would be again be paying $3.00 a gallon soon. Fortunately, gas prices peaked last month and have been on a slow and relatively steady downturn during the past 20 days, which is even more incentive for Americans to take a road trip this summer.” 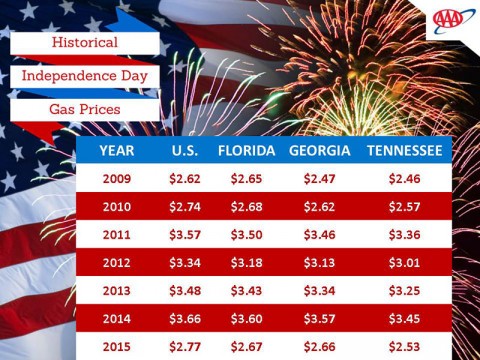 It can be relatively common for gas prices to increase in July as more Americans take long, summer road trips. For example, gas prices increased by an average of 16 cents per gallon during the month from 2011-2013.

Average U.S. gas prices in July 2014 dropped for 30 out of 31 days for a total of 16 cents per gallon, due to abundant petroleum supplies worldwide. This decline was the start of an eventual $1.65 per gallon drop through January.

“The national average price of gas is likely to remain less than $3.00 per gallon this year,” Jenkins continued. “Gas prices this month should drop or at least remain relatively flat in the near term as gasoline production increases to take advantage of high profit margins. Oil prices similarly should remain near current levels given that domestic, commercial supplies are about 19 percent higher than a year ago. Nevertheless, factors such as strong summertime demand or other unexpected events could send gas prices higher.”

Fuel demand is likely to be a key factor in whether gas prices drop or increase this summer. July and August are generally the two months with the highest level of U.S. driving, which could affect supplies and prices. If gasoline stocks decline due to strong demand, gas prices would likely rise. Regardless, demand generally drops significantly after Labor Day, which leads to lower gas prices in the fall.

There are a number of unexpected factors that could send summertime gas prices even higher than today, such as increased fighting in the Middle East, unexpected problems at major refineries or strong Atlantic hurricanes that disrupt refinery production.

AAA updates fuel price averages daily at www.fuelgaugereport.aaa.com. Every day up to 120,000 stations are surveyed based on credit card swipes and direct feeds in cooperation with the Oil Price Information Service (OPIS) and Wright Express for unmatched statistical reliability.