Pasadena, CA – While busily investigating bedrock types on Mars’ Mount Sharp and preparing for a drill test, NASA’s Curiosity Mars rover has also been looking up frequently to monitor sunspots on the face of the sun that is turned away from Earth.

Large sunspots are evident in views from Curiosity’s Mast Camera (Mastcam). Scientists temporarily have no other resource providing views of the sun from the opposite side of the solar system from Earth. The sun completes a rotation about once a month — faster near its equator than near its poles. 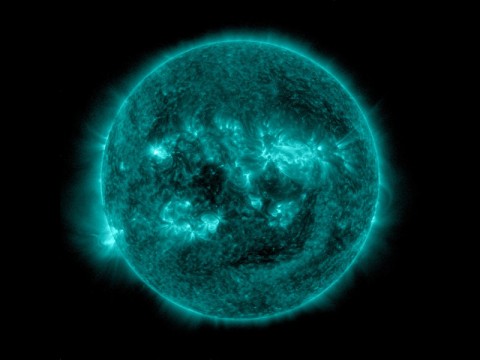 An eruption from the surface of the sun is conspicuous in the lower left portion of this July 6, 2015, image from NASA’s Earth-orbiting Solar Dynamics Observatory. (Image credit: NASA)

Information about sunspots that develop before they rotate into view of Earth and Earth-orbiting spacecraft is helpful in predicting space-weather effects of solar emissions related to sunspots.

A series of images from Curiosity showing sunspots rotating eastward in late June and early July is online here [1].

One sunspot or cluster that rotated out of Curiosity’s view over the July 4th weekend showed up by July 7th as a source area of a solar eruption observed by NASA’s Earth-orbiting Solar Dynamics Observatory, as seen here [2].

Another sunspot being tracked by Curiosity is on pace to face Earthward next week.

NASA’s STEREO-A spacecraft, which monitors the sun, is currently almost exactly behind the sun from Earth’s perspective, but for precisely that reason it is temporarily out of communication. The sun disrupts radio transmissions that pass too close to it.

Communication with Curiosity was also suspended last month when Mars passed nearly behind the sun, but the rover resumed full communication and operations in late June. Daily information from STEREO-A is expected to begin again this month.

“Tracking the sunspot activity on the far side of the sun is useful for space-weather forecasting,” said Yihua Zheng, project leader for NASA Space Weather Services at NASA Goddard Space Flight Center, Greenbelt, Maryland. “It helps us monitor how the sunspots evolve and grow before they become visible from this side.”

Space weather forecasting aids in anticipating and taking precautions against possible effects of solar storms on spacecraft orbiting Earth and elsewhere in the solar system. Intense space weather can degrade telephone communications, broadcasting and other electronic technology on Earth.

The main purpose for most imaging of the sun by Curiosity and other Mars rovers has been to monitor how its apparent brightness is affected by dust in Mars’ atmosphere above the rovers. Mark Lemmon of Texas A&M University, College Station, is a Mastcam team member who studies the Martian atmosphere. Three months ago, he coordinated sunset imaging by Curiosity for a Martian evening when Mercury was passing directly in front of the sun from Mars’ viewpoint.

“We saw sunspots in the images during the Mercury transit, and I was trying to distinguish Mercury from a sunspot,” Lemmon said. “I checked with heliophysicists who study sunspots and learned that STEREO-A was out of communications, so there was no current information about sunspots on that side of the sun. That’s how we learned it would be useful for Curiosity to monitor sunspots.”

In addition to its sunspot viewing, Curiosity is examining rocks near “Marias Pass.” A test is planned this month for the percussion mechanism of the rover’s sample-collecting drill, which exhibited a transient short circuit during transfer of sample material collected four months ago. The test is designed to provide diagnostic information for use in planning the rover’s next drilling operation, possibly in the Marias Pass area.

Curiosity has been working on Mars since early August 2012. It reached the base of Mount Sharp last year after fruitfully investigating outcrops closer to its landing site and then trekking to the mountain. The main mission objective now is to examine successively higher layers of Mount Sharp.

JPL, a division of the California Institute of Technology in Pasadena, built the rover and manages the project for NASA’s Science Mission Directorate in Washington.

For more information about Curiosity, visit: