Nashville, TN – The Tennessee Bureau of Investigation (TBI) has two new additions to the state’s ‘Top 10 Most Wanted’ list, Darryl Antoine Starks and Terrance Christopher Kimbrough, both of Nashville. 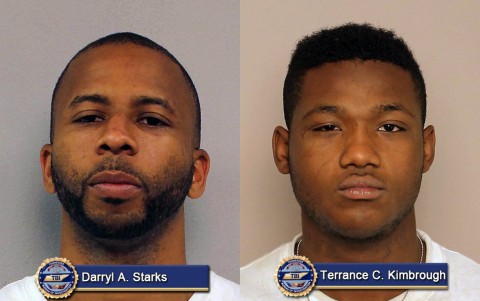 Starks, 31, left below, is an African-American man with black hair and brown eyes. He stands 6 feet tall and weighs approximately 160 pounds.

Kimbrough, 18, is an African-American man with black hair and brown eyes. He stands 6 feet 1 inch tall and weighs approximately 210 pounds.

Both men are believed to be in possession of firearms and should be considered extremely dangerous.

Anyone with information about the whereabouts of Starks or Kimbrough is urged to call the Tennessee Bureau of Investigation at 1.800.TBI.FIND. (1.800.824.3463). There are $1,000 rewards for information leading to the arrest of each individual.