Montgomery County, TN – Teamwork between Montgomery County Sheriff’s patrol, criminal investigations and K9 units early this morning led to the immediate recovery of stolen property from an aggravated burglary and the discovery of child abuse.

Just after midnight, Deputy Shanna Grice responded to a call on Kay Road where the victim said he had possibly noticed his neighbor, Richard Allen, 32, run from his back yard. Deputies noticed that the home, two garden sheds and a vehicle had been burglarized. 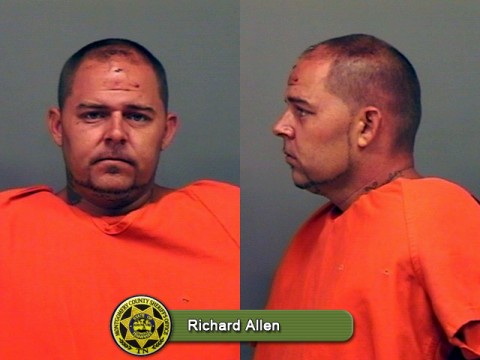 Deputies spoke to Allen, who was sitting on his porch at a neighboring residence, about the incident. K9 Deputy Eric Trout and K9 Fuse tracked the suspect’s scent to Allen’s back yard.

Someone at the home allowed deputies and Investigator Billy Wall to search inside, where they found several of the victim’s items.

After being placed into custody into the backseat of a patrol car, Allen became combative with officers and had to be chemically sprayed. He began banging his head into the bars, causing a laceration on his forehead.

Wall was speaking to Allen’s girlfriend when one of her children came forward, complaining of a stomach ache. Wall also noticed the child’s ear was bleeding.

The child claimed to have been beaten by Allen, along with a sibling in the home. One of the children required medical attention.

“Everyone did a thorough job investigating this case,” said Montgomery County Sheriff John Fuson. “If they had not been so thorough, we would have never known these children had been abused. Their thoroughness has definitely made an impact on the lives of these children.

Allen was booked into Montgomery County Jail after being treated at Gateway Medical Center for his injuries. He was charged with aggravated child abuse, child abuse, aggravated burglary, resisting arrest and vandalism. His bond was set at $185,000.

Department of Children’s Services along with MCSO Criminal Investigations will continue the investigation.