Nashville, TN – The Nashville bullpen shut Iowa out for four innings, but the Cubs rode their early lead and took the series finale on Friday night at First Tennessee Park with a 5-2 win.

Nashville tied a season high by working eight walks while the pitching staff added 13 strikeouts in the Friday night contest. It was the third time this season that the Sounds have dropped three of four from Iowa in a series.

The Cubs rolled out a pair of runs off starter Nathan Long in the first inning. Rubi Silva was the culprit, putting a well placed liner into the visiting bullpen for a two-run triple. Matt Szczur and Javy Baez plated on the extra-base hit, but Long concluded the frame by striking out the side. 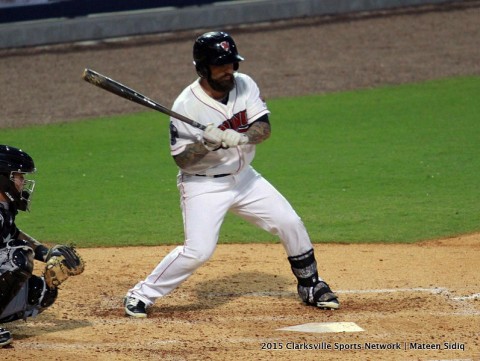 Nashville answered by grabbing a run in the bottom of the inning. After Joey Wendle reached on a fielder’s choice, Ryan Roberts walked and Jason Pridie singled to load the bases. Nate Freiman drove Wendle in with a shallow sacrifice fly, putting the score at 2-1.

The home team quickly squared things up in the next inning. After Carson Blair walked to open the second, Craig Gentry collected the Sounds’ second sacrifice fly of the night to even things at 2-2.

Iowa quickly regained the advantage with another pair of runs in the third. Szczur drove in John Andreoli with a double and Mike Olt singled home the designated hitter. The Cubs never trailed from that point, adding an insurance run in the fourth to put the score at 5-2.

All five runs were charged to Long, who exited after five innings with three walks and seven strikeouts. The right-hander saw the Cubs scatter seven hits during his outing as he dropped to 2-4 with the loss.

Nashville’s three relief arms kept the game close in the late innings. Switch-pitcher Pat Venditte made his first rehab appearance at Triple-A, allowing two hits and leaving the bases loaded with a strikeout in the sixth. He threw to six batters, hurling solely with his right arm. Ryan Dull fanned two over two innings and Aaron Kurcz struck out the side in the ninth to help the bullpen post four scoreless innings.

Iowa left-hander Drake Britton earned his seventh win of the season with 5 2/3 innings of work. The starter walked a season-high seven batters but surrendered just two runs on two hits.

The Sounds got leadoff doubles in back-to-back innings later in the evening. Niuman Romero hit a ball that kissed the white chalk down the third base line, staying fair and allowing him to trot to second. Gentry walked later in the seventh, but the Sounds left runners on the corners.

Roberts followed suit in the eighth, hammering a line drive into the Sounds bullpen. The opportunity never came to fruition though, as the left fielder was stranded at second.

With an eight-game homestand now in the rearview mirror, Nashville heads to Werner Park to play the Omaha Storm Chasers on Saturday night at 7:05pm. Lefty Barry Zito (6-7, 3.74) will man the mound in the series opener for the Sounds. Omaha has not announced their starter yet.