Des Moines, IA – The Sounds were on the winning side of a tight game Tuesday night, stealing the series opener against the Cubs at Principal Park by a score of 3-2.

Both teams recorded just seven hits, but Nashville never trailed Iowa. Sounds pitching struck out 11 and never walked a batter at any point during the win.

The Sounds stayed on par with a season storyline by scoring a run in the first inning. Andy Parrino found himself in the leadoff spot for just the fourth time this year and made an impact right out of the gate with a double to left.  After a groundout advanced the shortstop to third, reigning PCL Player of the Week Ryan Roberts scored him with a sacrifice fly. 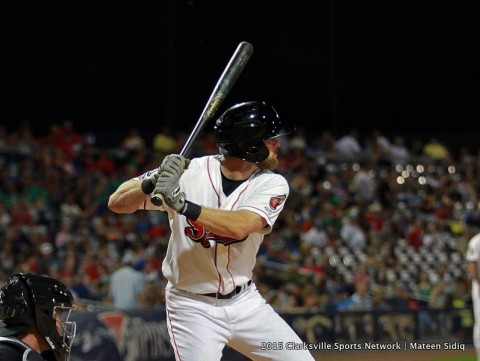 Iowa wasted little time to even the score at 1-1 when in the bottom of the first two singles and two hit by pitches led to a Cubs tally. Taylor Teagarden recorded the RBI and Mike Baxter scored the only run that starter Nathan Long would allow.

The right-hander was coming off a rain-shortened outing against the Memphis Redbirds and bounced back quite nicely on Tuesday evening. He threw six innings with no walks, five hits and three strikeouts, advancing his record to 3-4. Long was lifted for rehabbing reliever Sean Doolittle with the lead.

Doolittle threw 21 pitches in the seventh inning, 13 for strikes, surrendering one run and fanning the side. Unfortunately for the lefty, Taylor Davis led off the inning by cracking a 2-2 pitch over the center field wall. It would be the only hit he allowed in his appearance, sitting the next three batters down in order.

The Sounds got a solo home run of their own before Doolittle entered the game. Jake Smolinski continued his tear on PCL pitching by busting a pitch off Iowa starter Tsuyoshi Wada out of the park. The outfielder’s eighth home run of the season gave Nashville a 2-1 lead in the fourth.

Nashville plated the eventual game-winning run in the sixth by stringing a pair of hits together. With two away, Max Muncy slapped a harmless single left. The first baseman would cross home plate when Brent Morel followed with a double deep to center. Morel’s eighth RBI as a member of the Sounds helped the visitors claim a 3-2 advantage.

The bullpen took care of the rest and the Sounds secured a series-opening win. Ryan Dull struck out two during the eighth and Angel Castro recorded his fourth save with a scoreless ninth.